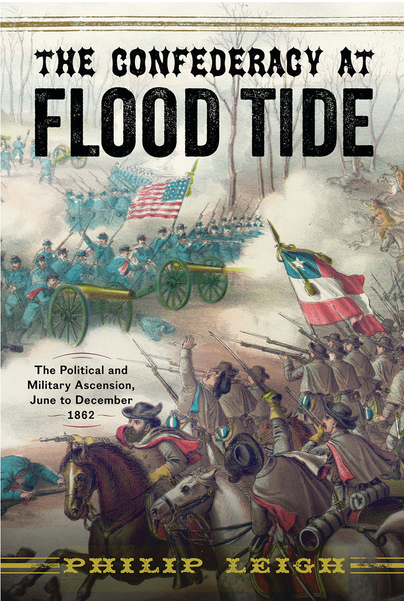 The Confederacy at Flood Tide (Hardback)

The Political and Military Ascension, June to December 1862

Add to Basket
Add to Wishlist
You'll be £19.99 closer to your next £10.00 credit when you purchase The Confederacy at Flood Tide. What's this?
+£4.50 UK Delivery or free UK delivery if order is over £35
(click here for international delivery rates)

The first six months of 1862 provided a string of Federal victories in the West at Mill Springs, Fort Donelson, Pea Ridge, and Shiloh. In May, New Orleans fell, and Union
General George McClellan’s army was so close to the Confederate capital of Richmond, Virginia, that the troops could set their watches by the city’s church bells. But then the unexpected happened. In June, Robert E. Lee’s Army of Virginia pushed McClellan’s much larger army back to the James River. In Europe, Confederate diplomats sought international recognition for the Confederate States of
America, which was made even more attractive now that a shortage of cotton made the powerful textile interests anxious to end the war. Further tipping the balance, in July, the Confederacy secretly ordered two of the latest ironclad ships from England’s famous Laird Shipyard—the same yard that built the commerce raider Alabama. These steam-powered ironclads would be far superior to anything in the Federal navy.
While the “high tide” of the Confederacy is often identifed as Pickett’s Charge during the Battle of Gettysburg in July 1863, the most opportune time for the Confederacy vanished seven months earlier, coinciding with President Abraham Lincoln’s Emancipation Proclamation in December 1862 and the failure of the seccesionist states to be recognized as a sovereign nation. As Philip Leigh explains in his engrossing new book, The Confederacy at Flood Tide: The Political and Military Ascension, June to December 1862, on every battlefront and in the governmental halls of Europe, the Confederate effort reached its furthest extent during the second half of 1862. But with the president’s proclamation, the possibility of slave revolts and decline in the production of the very products that were sustaining the Southern economy became real; coupled with Europe’s decision to reject Confederate overtures and halt the sale of the ironclads, the opportunity for Confederate success ended. The Confederacy would recede, and the great battles of 1863 and 1864 only marked the Southerners’ tenacity and stubborn belief in a lost cause.

The popular conception is that the Confederacy reached a ‘high tide’ mark on the 3 July 1863 when ‘Pickett’s Charge’ failed to breech the Union line at Gettysburg. Leigh is not alone in making a counter argument that the second half of 1862 offered the greatest opportunity for the breakaway Southern States, however he does bring a freshness of thinking to the topic, thus making this book a provocative and absorbing read...

The consensus view that Federal victory was inevitable is not challenged. However Leigh does present a compelling picture of a Confederacy in the ascendancy during the latter part of 1862. The British decision to stay neutral and Lincoln’s Emancipation Proclamation in December ended all hopes of Southern secession. The author does an excellent job in articulating these two drivers and describing the context in which they played out into a conflict which dragged on for a further two years with no prospect of an overall Confederate victory.

Leigh’s book explains, as nothing I’ve read before, how the Confederacy’s most promising time for winning independence resulted from a surge across multiple fronts, as opposed to a couple of isolated advances. The book brings new perspectives to a period that has too often been retold as the same limited routine.

“The Confederacy at Flood Tide ties together the far-flung theaters of the war and the contemporaneous political situation which emphasizes the interconnections among them. Mr. Leigh does not accept offhand the standard versions presented as history, but drills into the events without preconceptions, the better to determine the causes and impacts.”

“Philip Leigh has done it once again. With The Confederacy at Flood Tide, he interweaves narrative and analysis to upend our conventional wisdom about the rise and fall of the South’s fortunes during the Civil War. A must read for anyone looking for a deeper understanding of those critical months in 1862 when the South could, just for a moment, see the possibility of victory.”