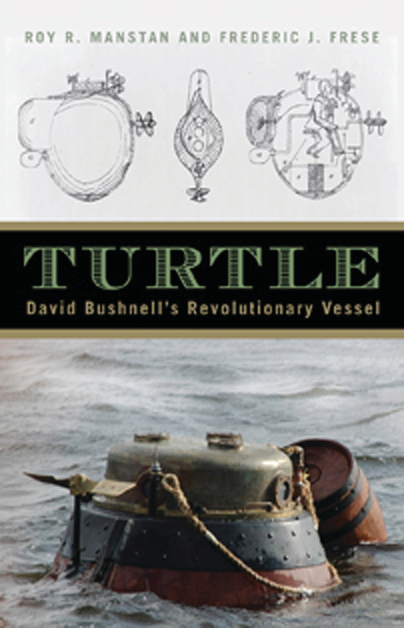 Add to Basket
Add to Wishlist
You'll be £16.99 closer to your next £10.00 credit when you purchase Turtle. What's this?
+£4.50 UK Delivery or free UK delivery if order is over £35
(click here for international delivery rates)

At the onset of the American Revolution, the British expected to quell the rebellion quickly with a show of overwhelming force. In an experiment in asymmetric warfare, David Bushnell created the first submarine vessel designed specifically “for the destruction of vessels of war.” On a quiet September night in 1776, sergeant Ezra Lee maneuvered Bushnell’s strange little craft out from Manhattan and into the midst of the greatest naval fleet ever assembled in the Americas. Lee’s goal was to sink the British flagship HMS Eagle by attaching a powerful explosive to its hull. Although the mission was unsuccessful, Bushnell’s concept of submarine warfare was considered by George Washington to have been “an effort of genius.”rnrnDavid Bushnell was raised in the town of Saybrook at the mouth of the Connecticut River. More than two centuries later, another Turtle would be launched into the same river within sight of Bushnell’s first forays with his vesselrnduring the summer of 1775. Under the direction of technical arts teacher Frederic J. Frese, students at Old Saybrook High School created a working replica of Bushnell’s submarine, facilitated through an education partnershiprnwith the Naval Undersea Warfare Center in Newport, Rhode Island, where Roy R. Manstan was a mechanical engineer and Navy trained diver. With twenty-first century submariners at the helm, the Turtle replica was subjected to a series of operational tests at the Mystic Seaport Museum in Mystic, Connecticut. In Turtle: David Bushnell’s Revolutionary Vessel, the authors provide new insight into Bushnell’s “engine of devastation,” tracing the history of undersea warfare before Bushnell and the origin of the many innovations Bushnell understood would be necessary for conducting a covert submarine attack. The knowledge gained from testing the Turtle replica enabled the authors to speculate as to what America’s first submariner Ezra Lee experienced that September night and what may have caused the attack to fail. Roy R. Manstan and Frederic J. Frese.

This fascinating book covers the events and developments of both the 18th and the 20th Century Turtles. It is a most interesting read; its subject has been meticulously researched, tested in practice and very well put together.

ROY R. MANSTAN is a mechanical engineer and former Command Diving Officer of the NUWC. He has degrees from Lafayette College, the University of Connecticut, and Connecticut College.