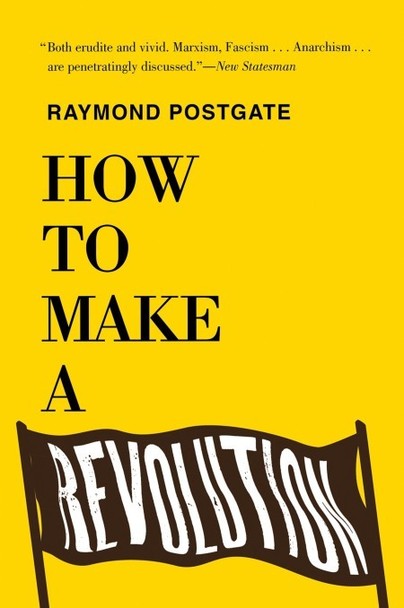 How to Make a Revolution (Paperback)

Add to Basket
Add to Wishlist
You'll be £12.99 closer to your next £10.00 credit when you purchase How to Make a Revolution. What's this?
+£4.50 UK Delivery or free UK delivery if order is over £40
(click here for international delivery rates)

The first third of the twentieth century saw a seismic upheaval in global politics and society that still reverberates today. Communism and fascism toppled both traditional monarchies and representative democracies, while trade unions and other factions effectively challenged existing governments to adopt reforms or face crippling economic or social upheaval. Given these extraordinary events, Raymond Postgate set forth in How to Make a Revolution to objectively discuss revolutionary methods, and which tactics or strategies are the most effective. Drawing on his own idealistic experience as a young labor agitator and editor of a communist newspaper and more than fifteen years of close study of past revolutionary history and theories, the author dispassionately discusses Marxism, fascism, anarchism, and Blanquism (a doctrine within socialism), as well as syndicalism and industrial unionism. He then reviews revolutionary practice, including general strikes, financial pressure, armed revolution, and communist tactics, and ends with a prescient and frightening conclusion: without general consensus and determination, a peaceful revolution is impossible, and “if no action is taken, action of another kind will be taken for us. . . . The continuance of uncertainty will mean that the disillusioned will drift steadily across to a Fascist organization. Fascism means war; the character of a Fascist State is fairly well known. Once it is established, those who read, who write, who publish or who print, books like this are likely to be dead or in concentration camps.” Originally published in 1934, Postgate’s book was heralded for its clarity and scholarship.

RAYMOND POSTGATE (1896–1971) was a journalist, author, socialist, and founder of the Good Food Guide. An early advocate for communism, he broke from the Moscow- directed Communist International in 1922 and became a leading figure in the independent British Labour movement. He was an astute and prolific commentator whose many books and articles were influential in twentieth-century British political theory and policy.