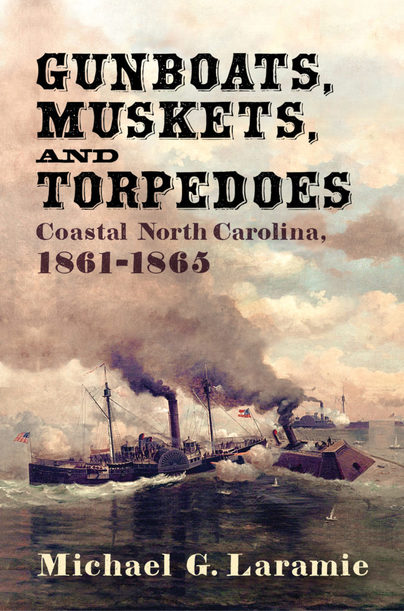 Add to Basket
Add to Wishlist
You'll be £25.00 closer to your next £10.00 credit when you purchase Gunboats, Muskets, and Torpedoes. What's this?
+£4.50 UK Delivery or free UK delivery if order is over £35
(click here for international delivery rates)

From the first shots at Cape Hatteras in the summer of 1861 to the fall of Fort Fisher in early 1865, the contest for coastal North Carolina during the American Civil War was crucial to the Union victory. With a clear naval superiority over the South, the North conducted blockading and amphibious operations from Virginia to Texas, including the three-hundred-mile seacoast of North Carolina. With its Pamlico and Albemarle Sounds—fed by navigable rivers that reached deep into the interior—and major onfederate port of Wilmington, the Carolina coast was essential for the distribution of foreign goods and supplies to Confederate forces in Virginia and elsewhere. If the Union was able to capture Wilmington or advance on the interior waters, they would cripple the South’s war efforts.

In Gunboats, Muskets, and Torpedoes: Coastal North Carolina, 1861–1865, award-winning historian Michael G. Laramie chronicles both the battle over supplying the South by sea as well as the ways this region proved to be a fertile ground for the application of new technologies. With the advent of steam propulsion, the telegraph, rifled cannon, repeating firearms, ironclads, and naval mines, the methods and tactics of the old wooden walls soon fell to those of this first major conflict of the industrial age. Soldiers and sailors could fire farther and faster than ever before. Rail transportation allowed commanders to quickly shift men and materials to meet an oncoming threat or exploit an enemy weakness. Fortifications changed to meet the challenges imposed by improved artillery, while the telegraph stretched the battlefield even further. Yet for all the technological changes, many of which would be harbingers of greater conflicts to come, the real story of this strategic coast is found in the words and actions of the soldiers and sailors who vied for this region for nearly four years. It is here, where decisions intersected with logistical hurdles, geography, valor, and fear to shape the conflict; a conflict that would ultimately set the postwar nation on track to becoming a modern naval power.