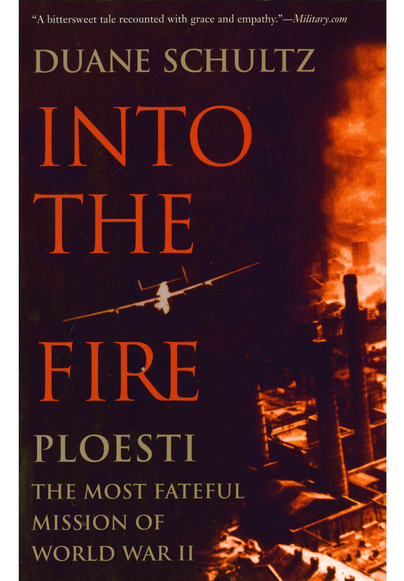 Into The Fire (Paperback)

Ploesti : The Most Fateful Mission of World War II

Add to Basket
Add to Wishlist
You'll be £12.99 closer to your next £10.00 credit when you purchase Into The Fire. What's this?
+£4.50 UK Delivery or free UK delivery if order is over £35
(click here for international delivery rates)

Planned by Winston Churchill, authorized by Dwight D. Eisenhower, and executed by five specially trained American bomber unit, the attack on the oil refineries of Ploesti, Romania, was among the most daring and dangerous missions of World War II. If the raid succeeded, the Nazi war machine would suffer a devastating blow. On August 1, 1943, nearly two hundred B-24 bombers flew from Benghazi, North Africa, with directions to descend on Ploesti at treetop level, bomb the refineries, and return. The low-level bombers could invade enemy radar and were thought to be more difficult to shoot down. But despite warnings that a German heavy flak train had moved into the area and that the secrecy of their mission had been compromised, the bombers were sent out. Minutes from the target, one of the commanders made a wrong turn, leading the formations away from Ploesti. Recovering from this mistake, most of the bombers relocated the refineries, but the mission was doomed. The ensuing air-grounnd battle claimed dozens of the bombers, and many of those who survived the ordeal were forced to ditch in the ocean or remote areas due to lack of fuel or structural damage. In Into The Fire: Ploesti, The Most Fateful Mission Of world War II, Duane Schultz re-creates this great battle, combining original research and interviews with survivors in order to capture the tension, drama, and heroics of the warring sides. More Medals of Honor were awarded for this mission than any other aerial combat enterprise in the history of the United States. But the medals are bittersweet testimony to the courage of the 1,726 young men who risked all on a fateful attempt to cut off the Nazi supply of "black gold".