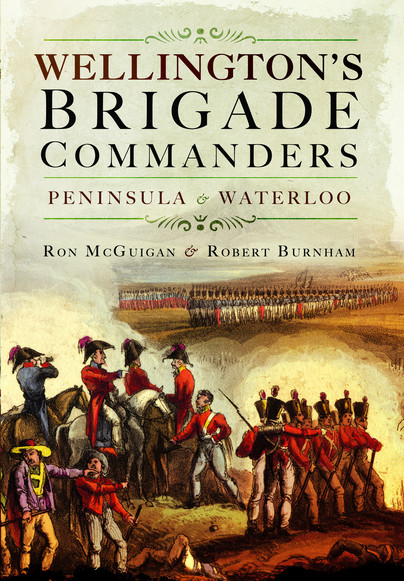 Add to Basket
Add to Wishlist
You'll be £25.00 closer to your next £10.00 credit when you purchase Wellington's Brigade Commanders. What's this?
+£4.50 UK Delivery or free UK delivery if order is over £35
(click here for international delivery rates)

Recent research into the Duke of Wellington's armies during the Peninsular War and the Waterloo campaign has enhanced our understanding of the men he led, and this new biographical guide to his brigade commanders is a valuable contribution to this growing field. Ron McGuigan and Robert Burnham have investigated the lives and careers of a group of men who performed a vital role in Wellington's chain of command.

These officers were the brigadiers and major generals who, for a variety of reasons, never made the jump to become permanent division commanders. Their characters, experience and level of competence were key factors in the successes and failures of the army as a whole. Their biographies give us a fascinating insight into their individual backgrounds, their strengths and weaknesses, and the makeup of the society they came from.

Each biography features a table covering essential information on the individual, his birth and death dates, the dates of his promotions and details of his major commands. This is followed by a concise account of his life and service.

It is evident from the briefest glance that this book is the product of careful thought and meticulous research. McGuigan’s and Burnham’s work is essentially a series of short biographies, examining the military records of those men who commanded brigades for any significant length of time during the Peninsular War or Waterloo campaign. The information is intelligently presented, with each section beginning with a helpful summary table that highlights key biographical details and notes of key developments in the individual’s career.

In fact, the entire book is written with the needs of the researcher in mind, with each page being packed with succinct, factual commentaries that amply demonstrate the careful and painstaking research that has gone into this publication. Every page contains a revelation or little known fact about these men, some of which relate to their personal lives, as well as their military careers. So numerous and interesting are these revelations, that they should not be repeated in this review, but instead readers should enjoy reading this superbly researched and written publication. Each chapter also ends with thoughtful comments on the legacy of each man, and their impact on the war. McGuigan and Burnham's careful attention to the needs of researchers are also visible in their decision to include an appendix outlining the periods when these men served under Wellington, thereby setting their actions and record into context. A wide range of pictures of these individuals are included, and it is a pleasant surprise to see that they are of a very high quality, which is no easy achievement, given that so little attention has been paid to many of these men. Once again, McGuigan and Burnham's professionalism has manifested itself here as it has throughout this book.

This is an excellent piece of work, and I expect to find it very useful!

Painstakingly researched, fast paced and intelligently presented. This is a vital, thought provoking and moving book of reference for serious scholars of the Napoleonic Wars.

This title provides a ‘who was who’ covering 71 of the Duke of Wellington’s generals serving as brigade commanders during the Peninsular War and the Waterloo campaign 1815. Based on their painstaking research into the background, career and character of each officer, the authors give factual information on the career of each commander and an evaluation of his performance in the field, offering fresh insight into the men who played a vital role in Wellington’s chain of command.