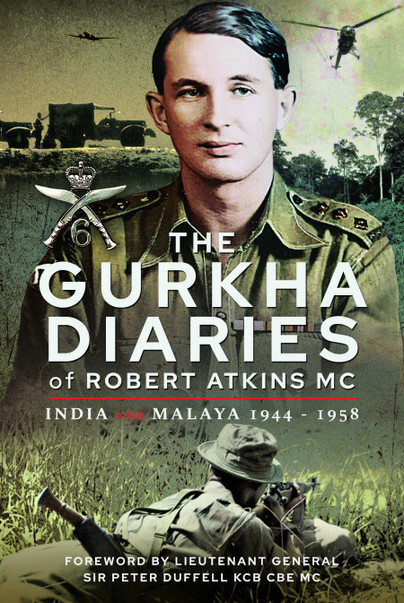 Click here for help on how to download our eBooks
Add to Basket
Add to Wishlist
You'll be £4.99 closer to your next £10.00 credit when you purchase The Gurkha Diaries of Robert Atkins MC. What's this?
Need a currency converter? Check XE.com for live rates

How fortunate it is that Robert Atkins wrote up his experiences as a young Gurkha officer in India and later Malaya as, seventy years on, they form an important contemporaneous record of two historically significant periods.

When India was granted Independence in 1947, irreconcilable religious differences made Partition inevitable. His account of the death, destruction and suffering that he and his soldiers witnessed makes for traumatic yet compelling reading.

In the aftermath of Independence the Gurkha Regiments were split between the Indian and British Armies and Robert returned to England and British service.

Three years later on his way to fight in the Korean War, he was ordered to join 1st Battalion, 6th Gurkha Rifles engaged in the battle against communist terrorists, known as the Malayan Emergency. Robert saw more than his share of action over next seven years in this eventually successful but bitterly fought campaign. His courage and leadership earned him the Military Cross.

The two diaries are introduced with helpful narratives setting each in their historical context.

Highlight: 'This is an astonishingly honest account of one man's war that makes for an unforgettable read.'

The book is an interesting read which covers a period that I didn't have much knowledge about, especially the history of the Gurkha regiments and how they were mercilessly carved up during Indian Independence with many wanting to stay with the British Army but not being allowed to.

There are also interesting pictures from the author's personal collection included.

The son of a lieutenant-colonel, Robert Atkins MC was commissioned in the 8th Gurkha Rifles in 1944 and subsequently served with the 6th Gurkha Rifles. Fortunately, for those of us who are interested in such events, he kept diaries during his time in the army and, much later in life, wrote up a narrative based on those diaries. It is this narrative which has now just been published by Pen & Sword.

The narrative is sparse but well-written and moves at a good pace. Robert was in India during Partition and later in Malaya during the 'Emergency' where he won the Military Cross. This is a great book which is well worth the modest 20 pounds investment.

Robert Atkins and his twin brother, Geoffrey, were born in 1927 in India where their father was serving with the Punjab Regiment. Both were educated at Rugby School.

Commissioned into the 8th Gurkha Rifles in 1944, Robert’s diary records his involvement during Indian Partition. After Independence, he returned to England joining a British regiment.

In 1950 he joined the 6th Gurkha Rifles in Malaya and spent the next eight years fighting Communist terrorists, earning the Military Cross.

Two years after marrying Anabel in 1956, Robert retired from the Army and they moved back to England, settling in Kent.

Robert and Anabel have two daughters, Celestine and Vicky. A former Army Boxing champion, he has pursued an active lifestyle, with many friends and interests, notably gardening and art.