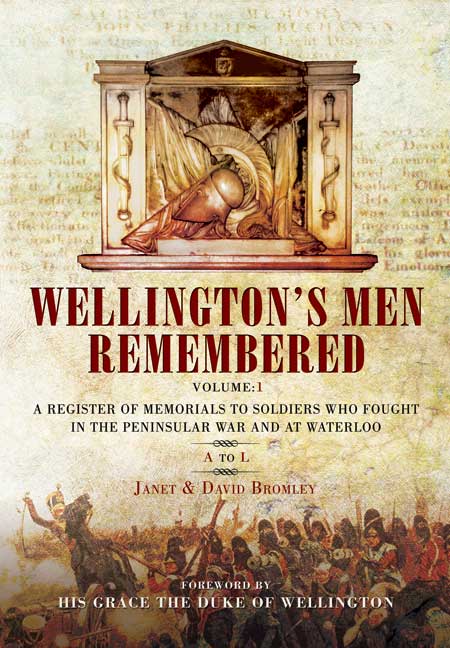 A Register of Memorials to Soldiers who Fought in the Peninsular War and at Waterloo - Vol 1: A to L

Add to Basket
Add to Wishlist
You'll be £60.00 closer to your next £10.00 credit when you purchase Wellington's Men Remembered Vol. 1. What's this?
+£4.50 UK Delivery or free UK delivery if order is over £35
(click here for international delivery rates)

Wellington's Men Remembered is a reference work to be published in two volumes, which has been compiled on behalf of the The Waterloo Association containing over 3,000 memorials to soldiers who fought in the Peninsular War and at Waterloo between 1808 and 1815, together with 150 battlefield and regimental memorials in 28 countries world wide.

Wellington's Men Remembered is an amazing book that the authors must have spent a lifetime researching.

Occasionally, a book crosses my desk which defies criticism in any conventional sense. This is one of them. It is a phenomenal piece of research, locating – or in some cases confirming the loss of – nearly 2000 memorials in this volume alone. The value of the volume is enhanced by biographical research wherever possible which brings many a story alive. This will surely become a standard source of reference of its kind and rightly so. My recommendation is this: if you have an interest in this period buy this book now as it is sure to be on general sale for but a short time and thus destined to fetch very high prices in the secondary market. A unique achievement, worthy of both thanks and high praise.

This is a unique book: a serious reference work, which displays real diligence and scholarship. It reflects extensive research in libraries and archive services and travel in the UK, Portugal, Spain, France and Belgium to locate, record, and photograph memorials. This book will undoubtedly interest family researchers, medal collectors, and those with a wider social and historic interest in the era. The CD-ROM presents a remarkable collection of images of memorials, 60 of which are reproduced in the book. These demonstrate a wealth of variation in design, size, materials, simplicity, grandeur and condition.

This tome is a real gem, and credit must go to its compilers and writers Janet and David Bromley. This book is lavishly illustrated and has an accompanying CD, which contains additional pictures to those in the book. It is a superb publiciation and should grace the shelves of any library or research institution. It will become a valuable reference work for both family and military historians to consult. Although priced at £60.00 it is well worth the expenditure.

A papcastle couple who have spent the past 12 years putting together a book have seen it published. David and Janet Bromley have devoted their retirement to recording war memorials around the world to soldiers who were part of the Battle of Waterloo and Peninsula War between 1808 and1815, involving 24 countries.

This is a valuable reference and source book which will take its place in any military history collection. A fine piece of academic study!

This book will be of considerable interest to those whose interest lies in the Peninsular War and Waterloo, whose library should not be without it, of only because of the amount of information if contains. Highly recommended.

Well, here it is. After many years of hard work and and as a result of scouring Britain's churchyards like a couple of modern-day Burke and Hares, the Bromleys' long-awaited Register of Memorials – or Wellington's Men Remembered – is finally here. Has it been worth the wait? It most certainly has. Family history societies, genealogists and medal collectors are going to love and value this book and it is sure to become the definitive work on the subject – and this is only volume one. This work will ensure that, like Wellington's men, the Bromleys too will be remembered. What next for Janet: Mastermind...? Very highly recommended.

This huge tome – more than 600 pages – forms the first volume of two gathering together more than 3,000 memorials to soldiers who fought in the Peninsular War and at Waterloo between 1808 and 1815, together with 150 battlefield and regimental memorials in 28 countries worldwide.