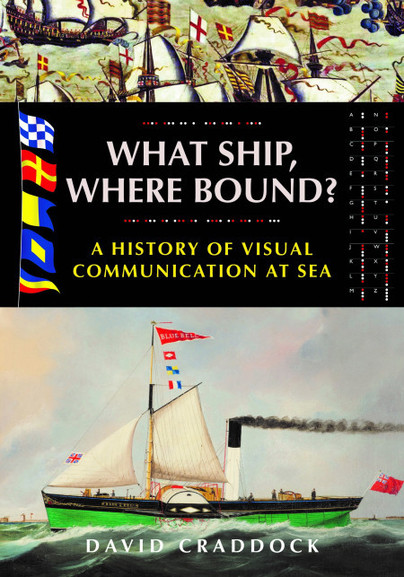 What Ship, Where Bound? (Paperback)

A History of Visual Communication at Sea

Preorder
Add to Wishlist
You'll be £10.39 closer to your next £10.00 credit when you purchase What Ship, Where Bound?. What's this?
+£4.50 UK Delivery or free UK delivery if order is over £35
(click here for international delivery rates)

What Ship, Where Bound? takes its title from the familiar opening exchange of signals between passing ships, and celebrates the long history of visual communications at sea. It traces the visual language of signalling from the earliest naval banners or streamers used by the Byzantines in AD 900 through to morse signalling still used at sea today.

The three sections, Flag Signalling, Semaphore, and Light Signalling each trace the development of the respective methods in meeting the needs of commanders for secure and unambiguous communication with their fleets. Though inextricably linked to naval tactics and fleet manoeuvres, the history of signalling at sea also reflects the exponential growth in global maritime trade in the nineteenth century when dozens of competing systems vied for the attention of ship owners and led to a huge proliferation of codes.

By setting each method in the context of its time, the book explores their practical use, successes and shortcomings and, particularly in the case of signal flags – though by no means exclusively so – their place in our visual, cultural and maritime heritage. Covering a wide spectrum of visual signalling methods from false fire, through shapes, furled sails and coloured flags to experiments in high speed text messaging by signal lamp, the book also examines the complex interrelation between all three methods under battle conditions. A detailed analysis of visual signal exchanges before and during the Battle of Jutland reveals both the success and ultimate limitations on flag signalling at the limits of visibility.

Extensively and beautifully illustrated, the book will appeal to present and former mariners familiar with the signals, all those with an interest in naval and maritime history, with particular emphasis on late eighteenth-century signalling practice, artists and ship modellers, graphic designers and all those involved in visual communications today.

DAVID CRADDOCK began his working life at sea as a cadet with P&O during which time he had plenty of practice with the signal exchange that would become the title of this, his first book. A subsequent career as a graphic designer in the museums and heritage sector and an abiding interest in our maritime history has led him to explore the theme of visual communication at sea drawing on the twin strands of his own experience. He is a member of the Society for Nautical Research and has recently become a trustee of the Britannia Museum at the Royal Naval College, Dartmouth.