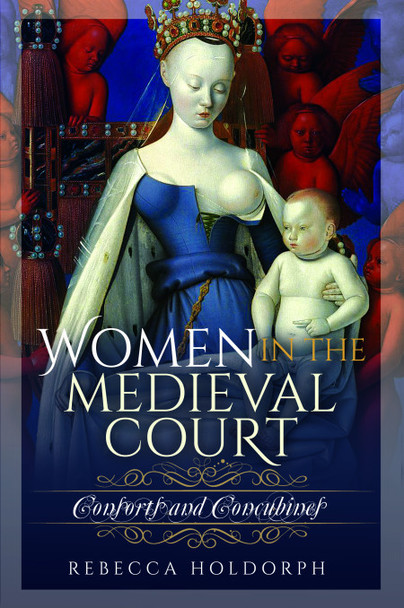 Women in the Medieval Court (Hardback)

Add to Basket
Add to Wishlist
You'll be £17.50 closer to your next £10.00 credit when you purchase Women in the Medieval Court. What's this?
+£4.50 UK Delivery or free UK delivery if order is over £35
(click here for international delivery rates)

While the courts of medieval Europe ate up tales of knights in shining armour and damsels in distress, the reality for the elite women who inhabited those courts could be very different. Medieval society might expect the noblewomen who decorated its courts to play the role of Queen Guinevere, but many of these women had very different ideas.

In a society dominated by men, women who stood out from the crowd could experience great success – and greater failure. Great queens, who sometimes ruled in their own right, fought wars and forged empires. Noblewomen acted behind the scenes to change the course of politics. Far from cloistered off from the world, powerful abbesses played the role of kingmaker. And concubines had a role to play as well, both as political actors and as mothers of children who might change a country’s destiny. They experienced tremendous success and dramatic downfalls.

Meet women from across medieval Europe, from a Danish queen who waged political war to form a Scandinavian empire, to a Tuscan countess who joined her troops on the battlefield. Whether they wielded power in battle, from a convent or throne room, or even in the bedchamber, these women were far from damsels in distress.

Women in the Medieval Court provides a detailed look into stand out women in the middles ages and their role in royal courts. This books highlights famed queens, noblewomen, abbesses and courtesans' and looked at how their wielded power and authority.

This book was far more than I expected! Rebecca Holdorph does not only give biographical data on a number of well known and rather unknown women of the middle ages, but really dives deep into their live stories to point out, where they came from, how they came into power in all their roles as wifes, mothers, regents or lovers. There is so much to explore and to learn from this book.

If you're interested in Medieval History or women in history this is a book you definitely want to read!! Very informative and interesting!

I would recommend this book to all those interested in the role of women and the power struggles they encountered across the European continent in medieval times. It’s a subject that I haven’t read about before and I guess that there are not many academic texts on the same subject. So this book is a valuable contribution to our understanding of the lives of women across European medieval society.

If you are a medieval enthusiast, fan of women's history, or generally looking to learn about the power dynamics between women and men in medieval society, WOMEN IN THE MEDIEVAL COURT is for you. Holdorph expertly categorizes women based on their lives and gives a generous insight into their lives, their rules, their troubles, and their romantic lives.

This book does an excellent job of not only bringing history to life, but its context. Holdorph does a beautiful job of highlighting the differences of authority and power, and how women wielded the latter. She paints quite the picture of some of these women and their effect on history, as well as those around them. A must for any history buff!

This was a really interesting read , we are taught that the woman in Medieval Court were at the wim of the men in power, wives, daughters and sisters, love interests or servants, . However, they played a far bigger role and we’re more powerful and influencial than history (written by men) gives them credit for.
This is a well researched and thoroughly interesting book, those interested in history or just in women, feminism will find great interest in, I thoroughly recommend this for anyone interested in history and the unwritten histories we never get to hear from the texts written by men of the past.

Students and history buffs alike will find great value in Holdorph’s text, and it would make a fine addition to history or women’s studies curricula alike, or to the home library of a hobbyist historian. It is a wide-reaching and yet deeply-researched text full of figures who were more crucial to history than they may have previously been given credit for, brought to the reader’s attention by a writer with polished prose that avoids stuffiness.

It was an interesting book about interesting women. We think that the woman in Medieval Court played the role of love objects for knights and troubadour. Wrong, they played the game but were also powerful and influential.
This is a well researched and engrossing book, I learned a lot and want to learn more.
Highly recommended.

This book shows us how strong medieval women dealt with challenges in male-dominated society..Scant records show that even though women were limited by law, they found ways to achieve their goals and wield power.. After being controlled by her father, a woman would be controlled by her husband.

The clever women in this book were able to succeed within such well-defined limits, both the official wife and the official concubine, An extremely well-written and researched book..

This is an excellent analysis of powerful medieval women who have sometimes been forgotten, or regarded as unusual. This was because they lived in a patriarchal society but there were really many of them. Rebecca Holdorph analyses how these 'consorts and concubines' attained power, how they kept power, their culture and education, and their struggles to fight against their rivals - mostly powerful men. The women who she studies include Matilda of Canossa, Caterina of Cornero, Alice Perrers and (my favourite) Katherine Swynford. Marguerite of Anjou is another interesting one.

Some of these women like Matilda and Marguerite raised armies to defeat their enemies, and went to great lengths to defend their territories. Some queens became regents, governing on behalf of their sons. Caterina couldn't defeat the power of her homeland Venice, which took control of Cyprus away from her, but when she was sent back to Venice, she set up her own cultured court! She was popular with her subjects, but sometimes that is not enough to overcome enemies.

The 'concubines' were just as fascinating, or even more interesting. Being a concubine was even more dangerous than being a queen. Many of them were murdered, for example, Agnes Sorel was probably killed by her lover's son. They were often punished if they got too 'uppity'. Parliament even passed a law directed at Alice Perrers!

I enjoyed this extensively researched book.

Fascinating and insightful, this book opens up oft-told histories to a new and important perspective, making the times all the more rich and interesting to the reader.

I studied the Medieval period through art, so what I know was mainly through the arts, artists, and religion. The manuscript was nicely formatted. The book could be read front to back or just in sections. Although the manuscript was scholarly, I found the sections to be interesting and a pleasure to read. The author supplied enough information that the reader does not need to use any additional resource material. However, I'm the type of reader that once my interests are piqued, I want to learn additional information.
I was unprepared for the strength exhibited by the women of this period, assuming their worth was giving birth to heirs. However this was not the only ability that the Medieval women performed. One of the most interesting woman, in my opinion, was Urraca of Leon. She separated from her husband so she could be queen, thus ruling not just one, but two kingdoms. The Queen was careful with her alliances, and often she played one enemy against another. Urraca "used her {...} children as kings did, she kept her sons single inorder to avoid creating a too powerful male figure in her kingdom".
I enjoyed the author's writing style and the scholarly elements of the book, and I believe this would be a good addition to any college syllabus. Thank you to NetGalley, Rebecca Holdorph, and Pen & Ink History for the privilege of reading the manuscript. As a result, I award this book a five out of five stars.

I really enjoyed this book a great deal. It was clever in that it began with Noble Women, and moved forward from there. This is a period I enjoy reading about. I learned about many women who might have seemed submissive, but really, as is usually the case "women run the world."

It’s a great, well researched, and interesting look into the lives of women who helped direct to course of Europe.

Rebecca Holdorph holds an MA in Medieval and Renaissance Culture and a PhD in History from the University of Southampton. Her doctoral research looked at the relationships between men, women, marriage, and power in late medieval England. Today she lives in Fort Collins, Colorado and spends her time balancing her love of history, travel, and good cooking.