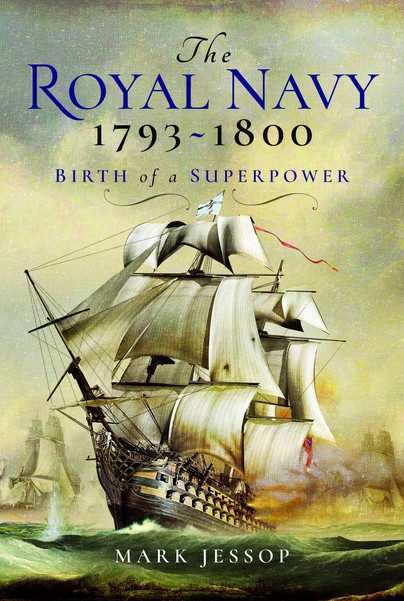 Birth of a Superpower

Click here for help on how to download our eBooks
Add to Basket
Add to Wishlist
You'll be £4.99 closer to your next £10.00 credit when you purchase The Royal Navy 1793–1800. What's this?
Need a currency converter? Check XE.com for live rates

France declared war upon the British in 1793. The burden to conduct a long conflict proved heavy for that island nation. Poverty increased. Liberties and freedoms were sometimes taken away. Thousands of men had to leave their families, and disease, desertion and death meant that many never returned.

As she passed away, many of her men and women might have wondered as to what had made her navy a true Neptune. What had assisted the slow birth of a naval 'superpower'? This book seeks to answer that very question.

In conclusion, for a book that is only 190 pages in length and which covers just a short period in history for a single institution and which also employs fictional devices, I learnt an incredible amount. It is highly accessible and conveys some very complex concepts in a way that was engaging and kept your attention throughout. At no point did I tire of this book and think it a worthy chore to have to finish it. Rather, I was excited to keep on reading and knew that each chapter would reveal some fascinating facts that I knew I would benefit from. It may seem that this is a book for beginners or novices in this period, but I promise you that anyone at any level would gain a great deal from reading this book. Highly recommended.

This is a highly readable history of the Royal Navy that packs an abundance of information into a scant 159 pages. Readers need not be familiar with either the navy or nautical language to grasp the content, and the book serves as a good introduction to the Royal Navy at a critical time in history.

It is well written and the author has a pleasant readable style, smoothly linking various themes.

There are many books chronicling Britain’s victorious sea battles during the Napoleonic Wars but here the author details the bedrock that led to British naval supremacy.

A remarkable, most useful and detailed readable study of what, in those telling seven years, made Britain and her navy a major super power for the next 100 years.

This is an extremely readable book. The publisher is to be applauded for placing references at the bottom of each page and the author for the clarity of his maps, which are always essential in such broad based work.

Unusually the author intertwines fiction and fact into the tale, inventing characters who are used to coalesce the narrative around the facts. This is a creative approach that works well especially for the general reader.

This book will be enjoyed by readers with only a passing interest in the subject, anyone rather more knowledgeable will still get a lot from it. Especially as throughout the book the author makes reference to publications in an impressive bibliography which lists some quite rare sources.

When France declared war on Britain in 1793 the Royal Navy barely had enough ships to cope. But eight years later she could claim to be a naval superpower. Author Mark Jessop, who himself served in the Royal Navy, seeks to show how this transformation actually occurred. Using primary sources of the era and secondary sources from the nineteenth century he gives a flavour of the language and opinions of politicians, naval officers and ordinary people swept up in the tumultuous storm of the last years of the the eighteenth century.

Jessop weaves a touch of fiction into the tale, creating generic characters whose lives were impacted by the navy; this touch, though only a small portion of the text, gives a bit of life to what could be a dull presentation of facts and figures.

As someone who has always enjoyed reading about that fascinating era, Jessop's work provides context for the many thrilling adventures set in that age. It wasn't all Aubreys and Hornblowers; the British navy was developed with a keen sense of purpose -- part of which was motivated, let's be honest, more by colonial greed than military superiority. And yet, without that rapid growth in power, Britain could well have fallen to the French ... and Napoleon could have seen his ambitions for conquest realized.

This is an original approach that works well, blending fiction and fact. The author produced the history book equivalent of a docu-drama, based on extensive research and the use of primary source material, and 19th C secondary source material. I highly recommend this book.

★★★★★ Deep love of the subject
This has the hallmarks of a writer who loves the subject matter, and wants to share that love and knowledge. This enthusiasm is noticeable on every page, and makes it an easy read. If the 19th century Royal Navy is your 'thing’, this is a must have.

Considering the short length of the book (159 pp) this is an incredibly detailed look at the Royal Navy rising to the challenge of the French Revolutionary War, a war we did not choose. All manner of aspects are studied - shipbuilding and repair, armament, manning, life on board a wooden wall, victualling etc. Jessop usefully reminds us of the way the naval war impacted the lives of people far removed from actual sea service, in farm and forest and manufactory. We see how the naval war reached deep into the life of our country in all sorts of ways. All of this is backed up by very deep research and informed by the author's own RN sea service. It includes what are in effect monographs on, for instance, the Press and the surgeon and his role. Somehow the whole sweep is crammed in from the diplomatic, political and strategic to the logistical, with excellently clear accounts of major actions like St Vincent and the Nile.