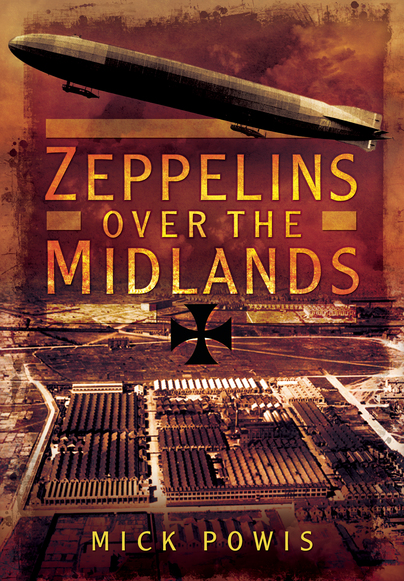 Zeppelins Over the Midlands (Hardback)

Add to Basket
Add to Wishlist
You'll be £19.99 closer to your next £10.00 credit when you purchase Zeppelins Over the Midlands. What's this?
+£4.50 UK Delivery or free UK delivery if order is over £35
(click here for international delivery rates)

On 31st January 1916 nine Zeppelin airships of the Imperial German Navy bombed the Midlands, opening a strategic bombing campaign designed to cripple British war production. It ended in total failure. The main target was Liverpool but none of the Zeppelins reached it. On foggy Monday night several major Midlands towns were bombed and 70 people killed, 35 in the Black Country between Birmingham and Wolverhampton, 15 in Burton on Trent, 10 in Loughborough, 5 in Derby, 3 in Scunthorpe and 2 in Ilkeston.

A lot is known about the military aspects of the raids but much less is known about what happened on the ground. While the press produced many human interest stories and atrocity propaganda, wartime censorship prohibited publication of any information that could be useful to the Germans, including the towns hit and names of the victims. Through intensive research the author has been able to identify many of the victims and give the full story of these events for the first time.

By linking the events on the ground and identifying the victims with larger concepts, such as aerial defense and strategic bombing, the book expands our understanding of the human costs of the raid.

In identifying the victims and linking the events on the ground with greater concepts such as aerial defence and strategic bombing, Zeppelin Over the Midlands offers an interesting analysis of 31 January 1916 and expands our understanding of the human costs of the raid.