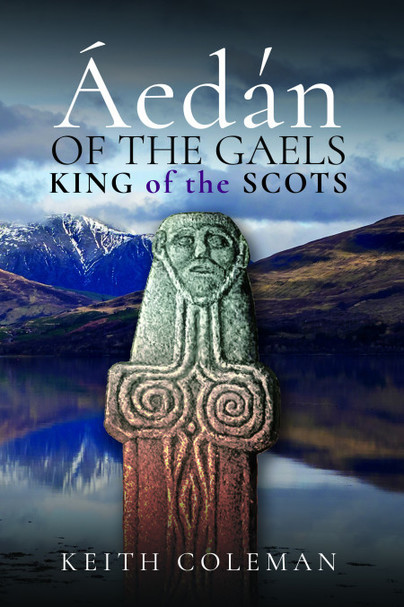 Áedán of the Gaels (ePub)

King of the Scots

Click here for help on how to download our eBooks
Add to Basket
Add to Wishlist
You'll be £8.99 closer to your next £10.00 credit when you purchase Áedán of the Gaels. What's this?
Need a currency converter? Check XE.com for live rates

This is the first full-length work devoted to Áedán mac Gabráin, 6th century king of Dál Riata in Scotland. An associate of the famous St. Columba, he was the first recorded king to be ordained in these Islands and was the most powerful ruler in his generation.

His astonishing military reach took him from Orkney, Pictland, Ireland, Northumbria and the Isle of Man. This book details his dominant career, which came to a shattering end after decades of warfare at the Battle of Degsaston in AD 603. Beyond the record of warfare, there is a unique and tantalising accumulation of legend concerning Áedán, from stories about his birth, to tales of him in battle with Irish heroes. English sources mention him and he is one of the few Gaelic kings to feature prominently in Welsh tradition, where he is remembered as a uniquely powerful player in the north of Britain.

Modern writers highlight Áedán as the father of a prince named Arthur, which has led to his place in Arthurian studies. Áedán’s prominence in his era qualifies him as a fascinating figure, whose life and legend are accessibly explored in this exciting account of this unique ruler.

An incredibly well researched book, crammed full of information gleaned from all kinds of sources. The author has done a fine job of gathering all the various threads, from myths to contemporary accounts, into a passable biography of the man.

Enhanced for academia with the inclusion of maps, and informative introduction, an Appendix (Aedan mac Gabrdin in Legend), a one page 'A Word about Names and Places', a two page Chronology, fourteen pages of Notes, a seven page Bibliography, and a four page Index, "Aedan of the Gaels: King of the Scots" is a seminal work of meticulous historical scholarship and a welcome contribution to personal, community, college, and university library Medieval Biography collections and a supplemental curriculum studies Medieval History syllabus.

A very insightful, well researched book. I would suggest more suited to an academic audience as it contains a great deal of detail regarding the ancient world of Ireland and Scotland. Having said that it is extremely interesting to connect these two countries and how much one was influenced by the other. A great read. My grateful thanks to Netgalley, the publishers and the hardworking author for the chance to read this book.

Any book that provides information about people who might be connected to Arthurian legends is well worth a look. Added to which, the link to St Columba is something that I personally find of great interest, having heard Michael Portillo refer to him in a recent Great Railway Journey progranmme, and the fact he figures prominently in Bernard Cornwell's Last Kingdom series. Brilliant history for the masses.

I liked what I read and discovered a fascinating and mysterious historical character.
Recommended.

"Áedán of the Gaels" is a pretty astonishing historical figure, and it's a pretty astonishing book! I enjoyed reading this book so much, that I'm now hoping there's a series of novels either in existence or in the pipeline. Keith Coleman takes you through Áedán's life with great skill, giving a taste of that time in history and leaving you longing for more.

Keith Coleman has a degree in History and an MA in Celto-Roman Studies from the University of Wales, Newport. He has been researching the history of Aedán over the past five years, a continuation of his long-term study of the legend and history of the Scottish kings. He is the author of The Afterlife of Kings James IV, Otherworld Legends of A Scottish King (Chronos Books, 2019) and maintain several blogs about the legends and history of Scotland and its kings. He is currently working on a biography of King James I to be published by Pen & Sword.