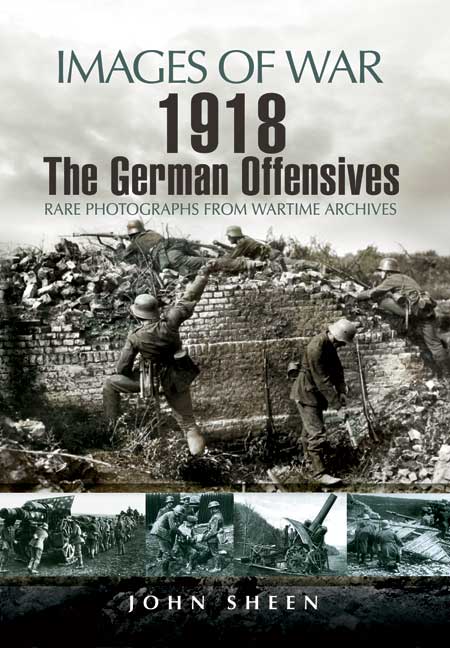 Click here for help on how to download our eBooks
Add to Basket
Add to Wishlist
You'll be £4.99 closer to your next £10.00 credit when you purchase 1918 The German Offensives. What's this?
Need a currency converter? Check XE.com for live rates

In March 1918 the German Army launched a series of offensives that brought them very close to winning the war. Military photographers followed their advance and took many photographs of the operations as they progressed. This is the war seen from the German perspective, British and French soldiers lie dead on the battlefield, and Allied prisoners are escorted to the rear, as the German Artillery pound away covering the advance of the 'Feldgrau'. These photographs are seldom seen in books dealing with the allied point of view. Many scarce and rare photographs show the carnage of battle throughout March, April and May 1918. The author has also included group photographs of some of the units involved, as well as in memoriam cards of individuals who fell or died of wounds. This book will be a useful reference to anyone with an interest in the
German Army during the First World War.

Pictures very often speak louder than words, and the ‘Images of War’ series of books is a fine idea. It is like watching a well made documentary unfold before your eyes. The photographs and their reproduction is superb, moreover John Sheen’s text is just right, giving you the context of the photographs, but never swamping them with too many words... The whole book is a superb piece of work, highly recommended.

This simply amazing collection of rare photos serves to illustrate the carnage of battle throughout the three critical months of 1918: March, April and May. Also included are a number of group photos of some of the units involved as well as the memoriam cards of individuals who fell or died of wounds. Being a dog lover I could not help but be moved by the image if a German Shepherd having its injured paw bandaged at the ‘Hund Lazarett’ close to the front lines. There is an absolute wealth of great images here, well worth a look.
An amazing archive, 10/10.

particularly atmospheric.... This is an unusual and welcome selection of illustrations.