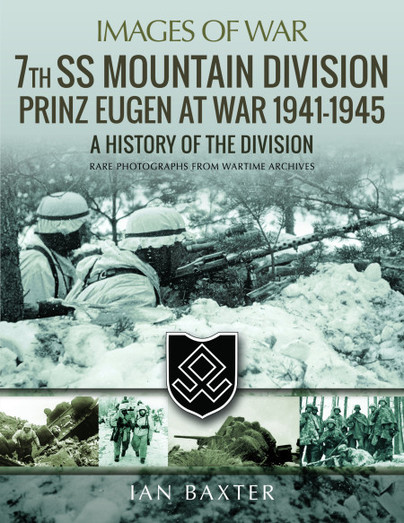 Drawing on a superb collection of rare and unpublished photographs the The 7th SS Volunteer Mountain Division Prinz Eugen 1941 - 1945 is the 7th book in the Waffen-SS Images of War Series written by Ian Baxter. The book tells the story of the 7th SS Mountain Division was formed in 1941 from the Volksdeutsche (ethnic German) volunteers and conscripts from the Banat, Independent State of Croatia, Hungary and Romania. It fought a brutal counter insurgency campaign against communist-led Yugoslav Partisan resistance forces in the occupied Serbia and Montenegro. It was given the title Prinz Eugen after Prince Eugene of Savoy, an outstanding military leader of the Habsburg Empire who liberated the Banat and Belgrade from the Ottoman Empire in the Austro Turkish War. It was initially named the SS-Freiwilligen-Division Prinz Eugen (SS-Volunteer Division Prinz Eugen).

The format of this book, and the series, has great appeal to me. This is
because the photographs are wartime and that they portray the events as they
happened rather than post-war reconstructions etc. As such this style of book
will have enormous attraction to those seeking period imagery such as reenactors,
uniform researchers, wargamers, museum and archive staff etc. If
you are like me and want to access period imagery, then this book is definitely
a “must-have” for your personal library.

This title as part of the Images at War series looking at a specific SS unit that I knew little about and has broadened my knowledge and covered a unit with a very dark history as regards their actions. The author has approached the title without an agenda that I could detect in that he has not attempted to just show the evil that was carried out, he has provided details that allows the reader to form their own opinions of the unit. The photographs are a very good mix of images which are lifted greatly by very well written captions that accompany each and every one of them. Another great aspect is that most of these images are taken by the men themselves and so shows aspects of life not often covered.

This is an interesting addition to the literature on Waffen SS and well worth a look.

A very interesting collection of images.

I really appreciated that the author, unlike others when it comes to histories of SS units, does not paint them as heroes and supermen but covers their many failings and atrocities. This range of books continues to expand and offer a good source of cheap reference to the modeller, historian or armour enthusiast alike. Some titles are better than others and I feel this tile offers a good introductory pictorial with some basic information.

The text in the book gives a good over view of the division and its activities during its war service but the photographs are the main part of the book and show the reality of fighting in the mountains. Of interest was the collection of Bulgarian armour vehicles which supported some of the operations during mid-1944.

This is to me, a little known part of WWII history and this volume goes some way to addressing my lack of knowledge on the subject.

As with all the books in the series, extended captions provide the information to the rare and often unpublished photos.

The photos are excellent as usual and show lots of action, the people and their equipment.

The seventh book by the same author on SS units in this fine and very popular Images of War Series. This volume follows the proven formula of concise text supporting a fine and unique collection of images – Highly Recommended.

The book could have been quite dark given the subject matter, however, the right balance is struck between an informative, but brief narrative, combined with photographs of varying poignancy. The net result is a book which addresses the barbarism of the campaign whilst positing it against the geo-political and tactical exigencies of the theatre. In light of this, the book, along with its fellow Images of War counterparts could either be read as a standalone quick read for the curious or as a foundation for further readings in this field.

Another book from the excellent "Images of War" series that I think is very detailed and informative. It is not very easy to find photos of this division, since the usual group of divisions always comes to mind when we talk about the SS. In short, a must for those who love the books of the Second World War.

Well worth adding to your library if you're a WWII history obsessive. Especially so if you're particularly interested in the Germans and the SS during WWII (as I am), obviously.

Another Images of War title from author Ian Baxter, taking on the topic of another of the SS divisions of WW2. In this case one of their Mountain Divisions. Formed in 1941 from Ethnic German volunteers who came from the area of Croatia, Romania and Hungary. They spent their war closely involved with fighting the Yugoslav partisans.

The book is split across 5 chapters, each one started off with some introductory text and then followed by a series of archive photos to illustrate each stage of the story, all with additional detail in the captions. The bulk show the troops themselves, along with their support equipment. Not much in the way of armoured vehicles, though there are a few Stug III and Pz IV from supporting Bulgarian units.

It tells the story from the unit formation, illustrates their troops in action, and ends with their surrender to Yugoslav units in 1945, when many of those that surrendered were not treated kindly thanks to their reputation for brutality against both partisans and civilians during the war.

The images in this book are topnotch and the majority I'd never seen before.

Another excellent book in the Images of War series, this offers some insight into a part of WW2 that does not get much exposure – the German campaign against Yugoslav partisans. Largely drawn from men originating from Croatia as well as Hungary and Romania, the 7th SS Mountain Division ‘Prinz Eugen’ conducted a campaign that was notable for the ethnic and religious enmity of the region.