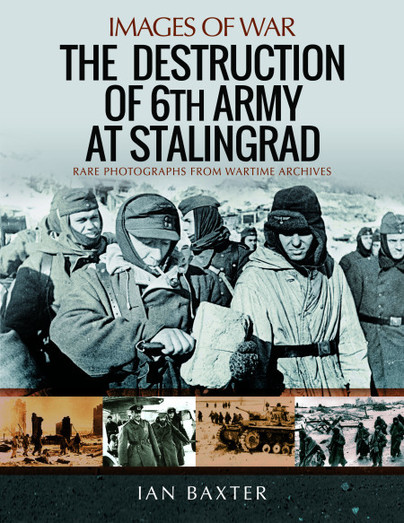 The Destruction of 6th Army at Stalingrad (Paperback)

Add to Basket
Add to Wishlist
You'll be £14.99 closer to your next £10.00 credit when you purchase The Destruction of 6th Army at Stalingrad. What's this?
+£4.50 UK Delivery or free UK delivery if order is over £35
(click here for international delivery rates)

The scale of death and destruction during the Battle of Stalingrad during late 1942 and early 1943 remains unprecedented in the history of warfare.

The annihilation of General von Paulus’ 6th Army epitomised the devastating defeat of Hitler’s ambition to conquer Stalin’s Soviet Union. After the successful Operation Blue offensive 6th Army reached the River Volga north of Stalingrad in summer 1942. With over-extended supply lines and facing steely opposition, increasingly desperate attempts to seize the city repeatedly failed. Slowly 6th Army became encircled. The German High Command attempted a number of relief attempts, notably Field Marshal von Manstein’s ‘Winter Storm’ but all were defeated by the tenacity of the enemy and the Russian winter. To their credit the men of 6th Army fought to the end but by February 1943 the last pockets of German resistance were either destroyed or had surrendered.

Thanks to a superb collection of unpublished photographs, this Images of War book provides an absorbing insight into the dramatic events of the last months of 6th Army’s doomed existence.

Baxter's book is a detailed examination of those 199 days, explaining clearly how and why the Germans were defeated.

Magnificent documentation both visual and written.

Ian Baxter is a well known military author and an acknowledged expert on German military history; this book is further evidence of his research and writing skills. I have read various accounts of Stalingrad but few have satisfactorily explained the German defeat, or given readers an impression of existing in such abominably low temperatures. German losses from cold were as severe as the horrendous losses from fighting a determined, and better equip, opponent.

Baxters book, a stunning pictorial record, has changed this.

The defeat of the German 6th Army was one of the critical battles of WWII. The Images of War series has established a high bar for concise text and prolific illustration, becoming a very popular series of books – Highly Recommended.

Without doubt one of the most famous battles on the Eastern Front in WW2, this is a good collection of images which illustrate the highs and lows of the events which eventually led to the surrender of the German 6th Army.
The book is split into 4 main chapters, following some background and context that led into the battle for Stalingrad itself. It starts with The Road to Hell, and then followed by The Siege of Stalingrad, Encircled and finally Destruction of the Sixth Army. All 4 chapters have some text to set the scene and then a selection of archive photos, all of which have captions that help in adding to the story. It does highlight an aspect of the story that perhaps we sometimes miss, and that is how long it all lasted. The advance to the city started in August 1942 but didn't end until the final surrender in February 1943. That is well illustrated in the photos, where in the early stages we see troops in shirt sleeves and summer uniforms. At the end, weary and hungry soldiers are seen wrapped up in any clothes and blankets they can find as they face the bitter cold of the Russian winter. The faces we see on the men, going from times of plenty and success, to defeat and surrender at the end. Lots of detail of uniforms and equipment in use, along with the destruction that was inflicted on the city and its' population. The statistics of casualties on all sides, including the civilian population, is really quite staggering, just for the one city. To round things off, a handy Order of Battle is included, showing the many units involved, including Rumanian, Croation and Italian troops on the German side.

This title as part of the Images at War series provides a visual plethora on the lead up and conditions that were prevalent in and around Stalingrad during the battle. the images being for the most part those of the common soldier if there is such a thing is a great plus in my view and takes away what the powers of the day wanted to portray and instead offers it as it was. This title as with most of the books in this series are a must have for any modeller who wants to show things as they were and not as war is presented to us.

The faces of the German soldiers, bold, worried, tense, desperate, defeated well represent the kaleidoscope of events that occurred during the battle of Stalingrad, after which the Germans were unable to regain the strategic initiative except in limited cases and the Soviets began a series of battles that brought them to Berlin in 1945.

Like other books in the Images of War series this book is packed full of superb photographs. A huge amount of detail of the 6th Army’s equipment and people is shown in a set of rare, many previously unpublished, photographs. The annotations are most informative and the supporting text, only ten of the hundred and fifty five pages, gives a brief overview of the campaign. What I found particularly interesting was the different slant on the causes of the defeat. In this book the strength and organization of the Soviet army is given more weight than the Russian winter. There is a distinct absence of the usual crop of photographs of grotesquely frozen German soldiers.
Anyone, even those with only a passing interest in World War Two, would enjoy this book and for re-enactors it could prove a gold mine. We highly recommend it.

This particular book is an excellent book indeed, not only do you have the fantastic array of photographs but you have the top notch writing from the author Ian Baxter, who is a well-known author on this subject. His writing is very good and always supports the photo or item he is writing about with great detail and accuracy. It’s always written about how harsh the weather was on the Eastern Front, the photographs in this book are fantastic in that they show the real harshness and extreme can get to you, the men really do looked utterly exhausted with war and the conditions. And this is the reason why this series is so good, because along with great writing, you get great images. I would thoroughly recommend this book, along with many others in the series.

These are powerful images and they will leave a lasting impression. To
anyone who likes to see period photographs they will be an excellent resource
and they will appeal to many interests. The interesting text gives a good
background to the events and it is highly informative but most of the book is
given to the excellent period imagery.
One of my special interests is the Russian Front and I found this a wonderful
book to read. The images are superb and the text supports them. I particularly
liked the book because of the images, and I was certainly impressed by it. It is
a superb addition to any Russian Front library.

Most of the photographs are new to this reviewer and it is pleasing to see that proper consideration has been given to the wider
context with some great images of the advance across the steppe and the establishment of the critical Don crossings. The book is very usefully split into four consecutive portfolios of photographs – the advance, the siege, the encirclement and the ‘end game’. There is a good mix of subjects and the author is particularly adept at describing the detail of weapons, accoutrements and uniforms. For readers seeking to understand the experience of a typical landser desperately struggling for survival in the ‘hell’ that was Stalingrad then this collection of images will be of interest.

The images are good and show the deterioration of the 6th Army during the defeat at Stalingrad. Some of the images focus on equipment identification and are interesting in showing the many variables that conditioned the German soldier at Stalingrad. A good introduction to the subject and a handy book to have available when reading more weighty texts.