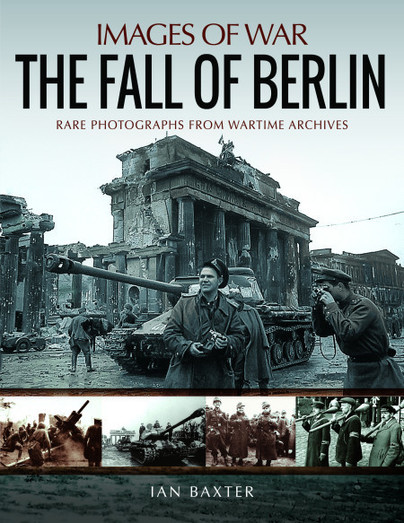 The Fall of Berlin (Paperback)

Add to Basket
Add to Wishlist
You'll be £14.99 closer to your next £10.00 credit when you purchase The Fall of Berlin. What's this?
+£4.50 UK Delivery or free UK delivery if order is over £35
(click here for international delivery rates)

By March 1945, the Red Army had closed in on Berlin. Marshal Zhukov, with almost a million soldiers and 20,000 tanks and guns at his disposal, launched his assault of the Seelow Heights. While costly with 30,000 Russians killed, it brought the Russian Army to the gates of the capital.

On 20 April, Hitler’s 56th birthday, Soviet artillery began a massive bombardment of the doomed city. The Fuhrer ordered every soldier, Hitlerjugend and Volksstrum to fight to the death. The house-to-house fighting that followed was brutal and savage with heavy casualties for both military and civilians.

Using superb Russian and German imagery this fine Images of War series book describes the Russian assault and Nazi last-ditch defence of Hitler’s capital during the final days of the Third Reich.

It is a starting point for knowing more about those great clashes that brought the Soviet armies to the gates of Berlin and which marked the history of those places for more than 40 years.

The images are well chosen – this reviewer cannot recall having seen any before – and Baxter adds to their value by pointing out important details, from weaponry to terrain to the appearance of the troops and the civilians.

The book would be very useful for battlefield guides, modellers and those generally interested in Berlin and the uniforms, equipment, fighting vehicles and weapons used in this battle. Of course there are other books that tell the story in greater detail, but this is not the intent of this volume which uses good quality photographs to tell the story. It is a handy sized informative, illustration rich and recommended book.

I would recommend to both war gamers and modelers alike, the information and images will provide a great resource for those with or are considering late war German or Russian armies.

The "Images of War" series continues with a look at the fall of Berlin in the last months of the Second World War. Brilliant photos, brilliand narrative.

The very popular Images Of War Series is expanded by this well researched and presented account of the Fall of Berlin. As the Western Allies were fighting their way eastwards, the Red Army was reaching its point of revenge. – Most Highly Recommended.

This is a very good book which gives an excellent insight into the ferocious battles that led to the fall of Germany in the Second World War. It is, however, the hundreds of photographs, many of them rare or previously unpublished which make the book so informative. I certainly recommend it wholeheartedly.

Brief but informative narrative passages trace the battle through its main stages, punctuating page after page of photographs, many that have never been published before. For readers fascinated with the uniforms and equipment used in the battle, Images of War: The Fall of Berlin is a richly detailed photographic record of the German military in 1945.

thought that this was an excellent reference book and it was crammed with interesting facts and images. The book focuses on the period where Berlin fell. As fellow readers who have an interest in World War II will know, by March 1945, the Red Army had closed in on Berlin and this book shows them approaching and entering the city, and the aftermath too... Using superb Russian and German imagery, including some of the photos that were staged at the time for impact, this Images of War series book describes the Russian assault and the Nazi last-ditch defense of Hitler’s capital during the final days of the Third Reich. It is an excellent reference guide and a book that I read from cover to cover in just a few hours – it is 4 stars from me, highly recommended!!

This title as part of the Images at War series is another great title in the line up as the images have been well chosen and presented to the viewer. I found the images in this offering particularly thought provoking as it shows all of the aspects of war in a relatively small area; the men who fought this war are shown at their best and worst as they fight for a dream that had ended. If you are always looking for photographs that light your imagination this is a book you must have.

A vital part of the story of WW2, particularly if you look at the casualty figures for the difference nations who were involved, where Russian soldiers and civilians suffered almost unimaginable numbers killed. There can be little wonder that the Russians did have their revenge once they took the city. Another fine addition to the series.

A good bit of reference material for those of us who like collecting reference on WWII.

The Images of War series continues to deliver excellent images complemented by sound historical narrative. As ever the maps are good. A good introduction book to fall of Berlin.