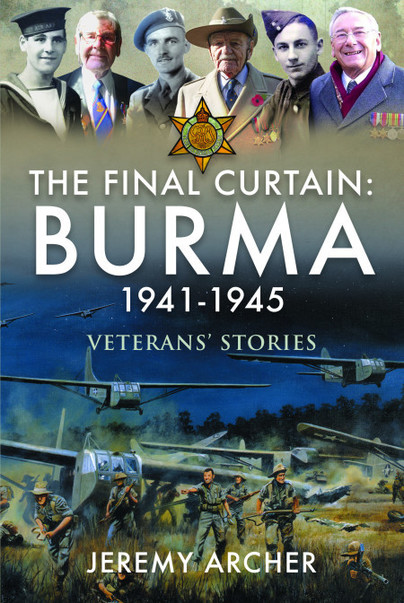 The Final Curtain: Burma 1941-1945 comprises interviews with some of the very few surviving veterans of this most arduous of campaigns. In their own words, soldiers, sailors and airmen now aged between 95 and 101 vividly recount the experiences that they endured more than seventy-five years ago. This is oral history at its best, from officers and men of 14th Army, which comprised some 100,000 British and other Commonwealth personnel, 340,000 from the Sub-Continent and 90,000 East and West Africans. The interviewees include individuals from all these groups. Their accounts cover the retreat from Burma, the Chindit operations behind Japanese lines, the hard-fought struggle in the Arakan, the crucial battles at Kohima and Imphal, and the final advance to Rangoon, culminating in a decisive victory.

The veterans featured in this fascinating collection include a Primus (Archbishop) of the Scottish Episcopal Church, a former Chairman of Manchester City Football Club, and the Principal of the Accra Polytechnic in Ghana as well as two career Army officers. Regardless of their post war achievements, all the contributors share the distinction of having served in a hugely demanding and ultimately victorious campaign against a merciless enemy. Their accounts make for inspiring and unforgettable reading.

After serving for ten years with The Devonshire and Dorset Regiment, Jeremy Archer worked in the City for almost thirty years. He has been a Trustee of the Burma Star Association since 2012, focusing on fund-raising and also bringing Burma veterans’ stories to a wider audience. His numerous military history publications include co-editing The Devonshire and Dorset Regiment 1958-2007 (Pen and Sword Military, 2007); The Old County Regiments: from Plassey to the Somme; and A Military Miscellany. He regularly writes for the British Army Review, the Journal of the Kilvert Society, Dorset Life, and Stand To!, the Journal of the Western Front Association. In 2019, Jeremy took an MA in Military History by Research at the University of Buckingham.