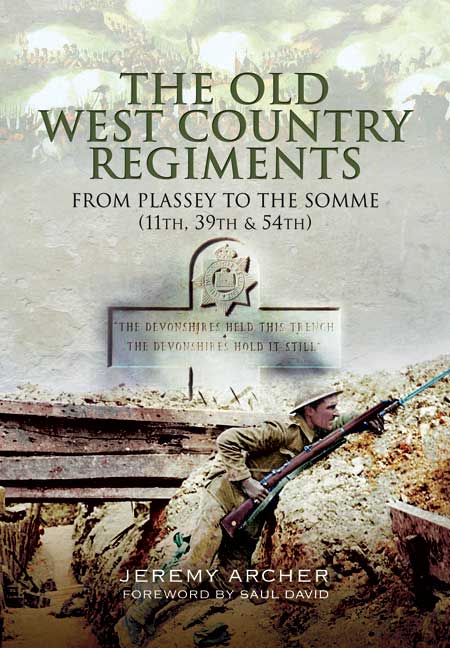 Drawing on the distinguished records of the three original West Country Regiments, this delightful and substantial book brings together a superb and varied collection of military anecdotes. Reflecting Britain’s Imperial history, these cover empire building in India, the American War of Independence, the Napoleonic era, the Crimean, Zulu and Boer Wars, as well as the horrors and heroism of The Great War.

As fascinating as the events and battles themselves is the rich cast of Regimental characters: selfless heroes mix with spies, explorers, scientists, radical agitators and philanderers. Whatever their experiences, exploits and the occasional scandal, what they all have in common is service, both to Crown and also to the Regiment.
Lovingly researched and compiled by Jeremy Archer, with some 340 illustrations, of which many are in colour, The Old West Country Regiments is a hugely satisfying and entertaining read, richly deserving of a place on the bookshelves of every military enthusiast, particularly those who served in these, or the successor, Regiments.

“I enjoyed The Old West Country Regiments very much: it is simply full of real gems, admirably researched and beautifully presented” - Richard Holmes

After serving for ten years with The Devonshire and Dorset Regiment, Jeremy Archer worked in the City for almost thirty years. He has been a Trustee of the Burma Star Association since 2012, focusing on fund-raising and also bringing Burma veterans’ stories to a wider audience. His numerous military history publications include co-editing The Devonshire and Dorset Regiment 1958-2007 (Pen and Sword Military, 2007); The Old County Regiments: from Plassey to the Somme; and A Military Miscellany. He regularly writes for the British Army Review, the Journal of the Kilvert Society, Dorset Life, and Stand To!, the Journal of the Western Front Association. In 2019, Jeremy took an MA in Military History by Research at the University of Buckingham.