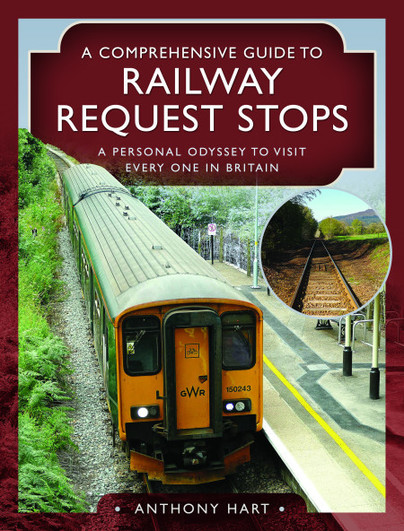 A Personal Odyssey to visit every one in Britain

Add to Basket
Add to Wishlist
You'll be £27.00 closer to your next £10.00 credit when you purchase A Comprehensive Guide to Railway Request Stops. What's this?
+£4.50 UK Delivery or free UK delivery if order is over £35
(click here for international delivery rates)

Rail By Request is an enthusiast’s personal story and tells how the author visited, photographed, and spent time at every request stop on mainland Britain. It also explains where his love of railways is rooted, why he began this odyssey and how it became a very different and important experience to him. Journeying across the whole railway map to capture these often ignored stops – not just for posterity, but for the journey.

The lure of request stops and the practicalities of completing the journey to discover them, is the core of the story. Researching every request stop in Britain and planning how to get there and overcoming any difficulties, became a source of great satisfaction.

Every stop is described and has at least one illustration. Some historical context to the stops is included, with current statistics.

The story also shows how, he ticked off each stop, but unexpectedly found himself passing the time engaged in a form of railwayana mindfulness – allowing the world to rush past whilst being alive in the moment. It shows a calmer slower world does exist.

This is the first time that this reviewer has come across a book entirely devoted to railway request stops and I have found it very interesting. Well illustrated and informative with lots of colour photographs and will appeal to all railway enthusiasts, especially those who like to read about the lesser known side of railway travel.

“A Comprehensive Guide to Railway Request Stops” is not only a tour around all of Britain’s request stops, it also shows just how much pleasure the author gets and indeed the reader can from exploring this subject. The author’s sheer determination to visit the often remote places reflects his strong personal desire to complete the challenge in the face of adversity.

The use of fantastic photography illustrates the author’s odyssey beautifully, giving attention to both the obvious and the detail.

This book isn’t just for those who have an interest in the more off the beaten track places of our railway system. It is also for those who seek to read a personal tale – a book that is a joy to read with biographical content and subtle humour throughout.

Anthony Hart has had a lifelong interest in railways. He is now retired, and although he spent most of his working life as a telephone engineer his first job at age fifteen was as an engine cleaner, and then locomotive fireman at the ex-GWR Reading shed, witnessing its final sad years.

He spent seven years living in Western Australia, where his interest in photographing railways began. On returning to England he settled in Swindon the home of the GWR.