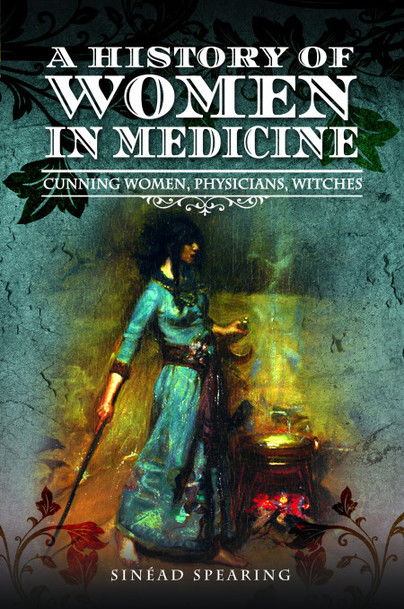 A History of Women in Medicine (Hardback)

Add to Basket
Add to Wishlist
You'll be £13.99 closer to your next £10.00 credit when you purchase A History of Women in Medicine. What's this?
+£4.50 UK Delivery or free UK delivery if order is over £35
(click here for international delivery rates)

Order within the next 7 hours, 17 minutes to get your order processed the next working day!

'Witch' is a powerful word with humble origins. Once used to describe an ancient British tribe known for its unique class of female physicians and priestesses, it grew into something grotesque, diabolical and dangerous.

A History of Women in Medicine: From Physicians to Witches? reveals the untold story of forgotten female physicians, their lives, practices and subsequent demonisation as witches. Originally held in high esteem in their communities, these women used herbs and ancient psychological processes to relieve the suffering of their patients. Often travelling long distances, moving from village to village, their medical and spiritual knowledge blended the boundaries between physician and priest. These ancient healers were the antithesis of the witch figure of today; instead they were knowledgeable therapists commanding respect, gratitude and high social status.

In this pioneering work, Sinéad Spearing draws on current archeological evidence, literature, folklore, case studies and original religious documentation to bring to life these forgotten healers. By doing so she exposes the elaborate conspiracy conceived by the Church to corrupt them in the eyes of the world.

Turning these women from benevolent therapists into the embodiment of evil required a fabricated theology to ensure those who collected medicinal herbs or practiced healing, would be viewed by society as dealing with the devil. From this diabolical association, female healers could then be labeled witches and be justly tortured and tried in the ensuing hysteria known today as the European witch craze.

Spearing draws on current archeological evidence, ethnobotany, literature, folklore, and case studies to bring to life forgotten women healers. She delves into old herbals and religious documentation as she weaves it all together into an engaging story of the European herb woman. They were usually esteemed, held social status, and traveled to other villages to distribute herbal and other medicines. We read descriptions of their lives, practices, and how some came to be labeled witches. The book begins with a sixth century woman buried in long robes and symbolic jewelry and had a leather bib. A bag around her waist contained plant material with an antler cone and knife. Similar “doctor bags” have been found buried with other women.

Beautifully researched and written; this book contains real insights. Sadly too, it is all too relevant today, where in much of the world women are still repressed and ill-treated.

Thus, this is a book that truly deserves the widest possible audience. For without studying history, we are doomed to repeat it.

As featured on Gals Guide

The main thesis is that medical care for most of the population in the early Middle Ages was a female affair carried out by ‘cunning women’ who were skilled not only in herbal cures but could locate lost property, identify thieves and even make sour milk wholesome. They attracted the hostility of the church (although monastic scribes freely borrowed their lore for their Latin herbaria) and were progressively demonised as witches, culminating in the great witch hunts of the 17th century.

A History of Women in Medicine provides a rich history of a topic that does not frequently appear within popular culture or the historical record, but it connects well with a number of topics that often receive more focus. Readers who enjoy the history of witches, witch trials, magic, or medicine will find this book to be a delight and beyond that anyone who wants to know more about the history of women will enjoy this book.

Stories of traveling female healer/physicians that were accused as being witches in the UK. Spearing tells of them using ancient apothecary books to cure modern ailments and the archaeology to learn more of the women themselves (shared remedies, carrying tool bags, singing melodic oaths, theology, training) and their persecution/circumstances surrounding their death.

I found this book fascinating. The history of women and their role in their culture is much more complicated than we are led to believe. In this book the author takes us back to the tribal times in 'Britain and details the very important role the cunning-women, later to be called witches, played in the society of the times. She then goes on to trace the changes in the perception of women that came about as a result of the growth of the Catholic Church in Europe and Britain. I have to say that at times in this history I became very angry with the actions of the church's leadership in regard to women. If denigrating 1/2 the population gave them more power and control, then denigrate they would. To think that for hundreds of years women were not allowed to contribute to society just because some church leader had a beef with his mother. The acts of brutality that resulted are quite frankly, disgusting. I found this book to be very well researched, well organized and easy to read.

This is not really about early women in medicine, but morean examination of how and why women who healed prior to being accepted into the medical profession were classed as witches and treated so badly by society. Fascinating and compelling reading.

Featured 'In the reading room' section

As featured in the 'In Brief' section

This is a vast subject and Spearing's book is an excellent introduction to it. It should have widespread appeal, bringing these forgotten voices to the fore again.

All About History, issue 76

An altogether impressive and sustained work of seminal scholarship, "A History of Women in Medicine: Cunning Women, Physicians, Witches" is an extraordinary and exceptionally informative study that will be a welcome addition to any and all community, college, and university library Women's History collections, and a 'must' for the personal reading lists of non-specialist general readers with an interest in the subject.

It is a remarkable read, I found it to be very hard-hitting and yet sensitive to those women it tells the stories of, it is a book that should be read by everyone, not just women who like me are interested in women’s history and celebrating how wonderful these women were but by all. I can guarantee there will be something within these pages that will intrigue everyone.... I thoroughly enjoyed reading this, it is a fresh and original book that looks into a different aspect of history.

This book uses archeological, historical and case study evidence to shine a light on the wise women of centuries past and how they went from highly respected members of society, to being tortured and degraded as spawns of Satan and sources of evil. It explains the origins of the modern word, witch and talks about the Anglo-Saxon tribe which essentially founded what we would call British witchcraft and healing. Spearing looks at a wise variety of sources to back up and support her research which is both intriguing and interesting. She uses a lot of translations from old English medicinal remedy texts which is a wonderful addition to the text and looks at the remains and graves of several suspected wise women throughout England and in particular one women found buried at the Cotswolds, a women she dubs Mildbryb (Mildred).

Sinéad Spearing is a psychological historian specialising in the research of obscure beliefs. She worked as a professional musician before returning to university to study psychology and philosophy. Following a number of articles published in Journals including those of The British Psychological Society and Mensa, Sinéad began researching the bizarre world of Old English medicine, psychiatry and associated supernatural traditions.