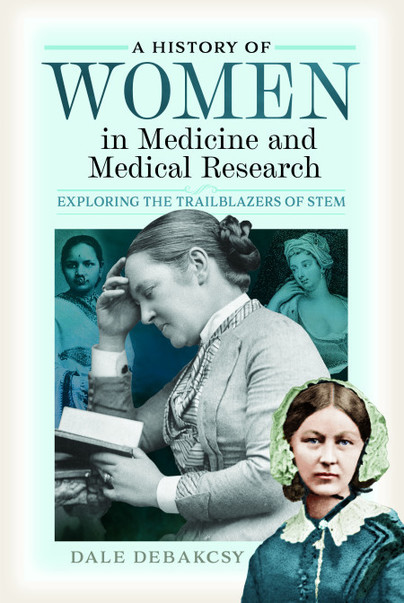 A History of Women in Medicine and Medical Research (Hardback)

Exploring the Trailblazers of STEM

Preorder
Add to Wishlist
You'll be £16.00 closer to your next £10.00 credit when you purchase A History of Women in Medicine and Medical Research. What's this?
+£4.50 UK Delivery or free UK delivery if order is over £40
(click here for international delivery rates)

In the nineteenth century, a small but dedicated group of European and American women rose to agitate for the inclusion of women in the medical profession. It is a historic tale that we have told and retold for decades, but it is far from where the story of women as physicians and healers begins. Stretching back into deepest antiquity, we possess accounts of women who were consulted by emperors and paupers alike for their medical expertise. They were surgeons, apothecaries, midwives, university lecturers, and medical researchers in correspondence with the most learned societies of their time.

And then it all came crashing down.

A History of Women in Medicine and Medical Research is the story of the women who participated in that early Golden Age, and of a medical establishment closing ranks against them so effectively that, by the early Victorian era, they not only were barred from practicing medicine, but from so much as stepping into a classroom where medical topics were being discussed. It is the story of that intrepid band of reformers and pioneers who built back the women's medical profession from the ashes and constructed a thriving new community of researchers and practitioners who within a century had retaken not only the ground that had been lost, but boldly advanced to levels of fame and achievement unimaginable to any previous era.

Told through in-depth accounts of the lives of the pioneers and practitioners who built and rebuilt the women's medical movement, this title dives into the lives of not only legendary figures like Florence Nightingale, Gertrude Elion, Rosalyn Yalow, and Elizabeth Blackwell, but visits women the world over whose medical contributions broke down doors and advanced the cause of women's and world health, like the revolutionary medieval physician Trota of Salerno, the pioneering eighteenth century midwife and businesswoman Madame du Coudray, the microbiological research trailblazer Mary Putnam Jacobi, and the HIV researcher and world epidemic response coordinator Francoise Barre-Sinoussi.

With over 140 stories spanning three millennia of global medicine, this book shines a light on the unknown heroes, towering discoveries, tragic missteps, and profound struggles that have accompanied the Rise, Fall, and Rebirth of the women's medical profession.

Dale DeBakcsy has written the popular bi-weekly Women In Science column at Women You Should Know (www.womenyoushouldknow.net) since 2014, creating a freely accessible archive of in-depth and rigorously researched articles detailing the history of women professionals in all branches of STEM. For three years, he was the author and illustrator for the History of Humanism series at New Humanist, and is a contributing author to the Great Minds column at Free Inquiry Magazine. His essays have appeared in Philosophy Now, The Freethinker, Skeptical Inquirer Magazine, American Atheist Magazine, The Humanist, and Free Inquiry Magazine. From 2007 until 2018, he (under the incredibly classy pseudonym Count Dolby von Luckner) and Geoffrey Schaeffer co-wrote the historical satire webcomic Frederick the Great: A Most Lamentable Comedy Breaching Space and Time, and in 2016 he published The Cartoon History of Humanism at The Humanist Press. By day, he is an instructor in world history, mathematics, and science in the beautiful California Bay Area. By night, he is… very tired. He is the proud father of two girls, two cats, and four chickens. This is his first book for Pen and Sword Books.