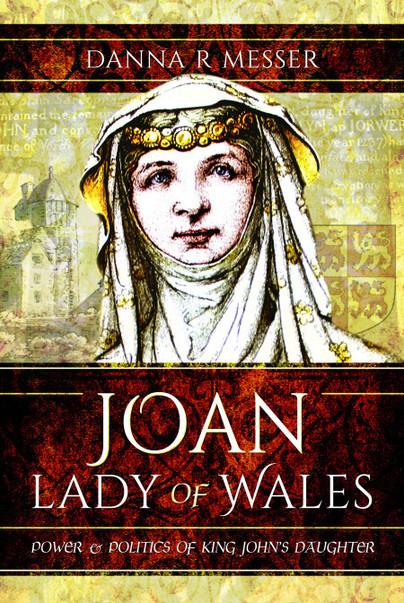 Click here for help on how to download our eBooks
Add to Basket
Add to Wishlist
You'll be £9.98 closer to your next £10.00 credit when you purchase Joan, Lady of Wales. What's this?
Need a currency converter? Check XE.com for live rates

The history of women in medieval Wales before the English conquest of 1282 is one largely shrouded in mystery. For the Age of Princes, an era defined by ever-increased threats of foreign hegemony, internal dynastic strife and constant warfare, the comings and goings of women are little noted in sources. This misfortune touches even the most well-known royal woman of the time, Joan of England (d. 1237), the wife of Llywelyn the Great of Gwynedd, illegitimate daughter of King John and half-sister to Henry III. With evidence of her hand in thwarting a full scale English invasion of Wales to a notorious scandal that ended with the public execution of her supposed lover by her husband and her own imprisonment, Joan’s is a known, but little-told or understood story defined by family turmoil, divided loyalties and political intrigue.

From the time her hand was promised in marriage as the result of the first Welsh-English alliance in 1201 to the end of her life, Joan’s place in the political wranglings between England and the Welsh kingdom of Gwynedd was a fundamental one. As the first woman to be designated Lady of Wales, her role as one a political diplomat in early thirteenth-century Anglo-Welsh relations was instrumental. This first-ever account of Siwan, as she was known to the Welsh, interweaves the details of her life and relationships with a gendered re-assessment of Anglo-Welsh politics by highlighting her involvement in affairs, discussing events in which she may well have been involved but have gone unrecorded and her overall deployment of royal female agency.

I enjoyed this book very much, the book subject Joan, Lady of Wales is a fascinating character and the authors enthusiasm for their subject shines through.

Good for those who like me, have an interest in or studying women's history and royalty. From 1211 on. A decent biography of her - life, marriage, war and more.

I thoroughly enjoyed this book - Joan, Lady of Wales. Joan is a fascinating and inspiring character and affords us a different perspective from which to view the medieval world.

This was an interesting read and I learned a lot. I will definitely be coming back to this time period and learning more.

Very little is known about Joan and even less about her background, but Danna R Messer has taken what there is and turned it into a complete, and first, biography of her, Joan, Lady of Wales: Power and Politics of King John’s Daughter.

There is an unspoken assumption in much medieval scholarship, that women were helpless damsels under the watchful care of fathers or brothers. The ability of medieval women to take independent action or speak out was restricted by the stage of their “life cycle.” Aristocratic maidens and widows had more autonomy than wives and mothers did. Sadly, history is told by those in power and the actual role of medieval women is rarely portrayed. Partially that is due to their invisibility and scant primary source materials referencing them. But more often it reflects gender bias found in scholarship. Fortunately, female scholars are beginning to explore the role of women in medieval history and determine how gender impacts the way these figures are seen.

Danna Messer addresses all these issues in her book, Joan of Wales; Power & Politics of King John’s Daughter. Joan was the illegitimate daughter of King John of England (c. 1167-1216). She was given in marriage to Llywelyn ap Iorwerth (prince of North Wales) to broker a peace between the two lands. Yet Messer’s gives a compelling argument that Joan was far more than an aristocratic consort. She took on the traditional role as Llywelyn’s wife (through hospitality and gift-giving) while also holding significant political responsibilities. Joan did all that and more as she served as a political diplomat, emissary, and counselor during the reigns of both King John and Henry III, her half-brother

The book asks the question “what if”? The questions are answered with a mixture of primary sources and conjecture. Together they provide us a glimpse of how history may have been and the role of medieval aristocratic/royal women in society and politics. It is an exploration that is long overdue.

I enjoyed this book, and although it's true that the historical record is scarce when it comes to Joan - and other Medieval women - I feel as if the author still presented the best possible story of her life that we have available to us. The sources are examined and interpreted and I was grateful for the author's expertise on this, to help place them in context and alongside other influential people of Joan's time. The book goes into forbidden love affairs, grisly executions, powerful family dynamics and the- at times - tense politics between Wales and England. I've learned a lot about the Welsh kingdoms in the Medieval period and what was expected of Joan in her duties. A good read for anyone interested in Medieval history, King John, the history of women or Welsh Medieval history.

I really enjoyed this and would recommend to all who have an interest in the history of noble women, not just Joan as this book includes others!

Joan, Lady of Wales has long needed her own biography, to bring her out from the shadows of the lives of her father, brother, husband and son – and this book does not disappoint. It is, quite simply, a beautifully-executed, fascinating and addictive read.

Medieval women held many different titles that defined their roles and their connections. Mothers, daughters, and wives tended to be the most popular and the most common. Titles such as queen, political diplomat, and peace weaver tend to be rare and given to women of power. Yet, these words accurately depict a unique woman who lived during the Angevin/ Plantagenet dynasty. She was the illegitimate daughter of the notorious King John and the wife of Llywelyn the Great, a Prince of Wales. She worked tirelessly to establish peace between England and Wales, yet she has not received much attention in the past. Her name was Joan, Lady of Wales, and her story is brought to life in Danna R. Messer’s book, “Joan, Lady of Wales: Power and Politics of King John’s Daughter”.

I would like to thank Pen and Sword Books and Net Galley for sending me a copy of this book. I did not know much about Joan, except what I read about her in Sharon Bennett Connolly’s latest book, “Ladies of Magna Carta: Women of Influence in Thirteenth-Century England”. She sounded really interesting so when I heard about this book by Messer, I wanted to read it to learn more about Joan.

As someone who did not know a lot about Joan or medieval Wales, I found this book informative and enjoyable. Messer takes the time to explain what life was like for a royal Welsh couple, like Joan and Llywelyn, and why their marriage made such an impact in the long run. On paper, it was a princess from England marrying a prince from Wales, but what made this union so unique was the fact that Joan was the illegitimate daughter of King John and yet she was treated like a beloved legitimate child. Of course, this marriage was first and foremost, a political match, but it seemed to have developed into a strong and loving partnership, that endured 30 years of trials and tribulations.

One of the major trials that Joan had to deal with was to prevent England and Wales from going to war against each other. Truly a monumental challenge for, as Messer meticulously points out, Llywelyn and either King John or King Henry III were constantly having disagreements. I could just picture Joan getting exasperated that she had to try to calm things down between England and Wales every single time. Her diplomatic skills were truly remarkable, especially with how much influence she possessed in both countries.

Probably the most controversial event in Joan’s life is her affair with William de Braose, which led to his execution and her imprisonment. Messer does a good job explaining what we know about this situation. Unfortunately, like many events in Joan’s life, Messer has to use a bit of guesswork to try and put together the clues about Joan and figure out what happened. It can be a bit frustrating, but we have to remember that Joan lived over 800 years ago and women were not recorded as detailed as they are now or even 500 years ago. I think we can give Messer a pass on guessing where Joan was and what her role was in certain events.

Overall, I found this book enlightening. I think Messer’s writing style is engaging and she was dedicated to finding out the truth, as far as the facts would take her. I think this is a fantastic book for someone who needs an introduction to medieval Welsh royal lifestyle, the power of royal Welsh women, and of course, a meticulously detailed account of the life of Joan, Lady of Wales. If this describes you, check out “Joan, Lady of Wales: Power and Politics of King John’s Daughter” by Danna R. Messer.

I approached this knowing close to little about the figure, but I have a strong interest in the area. So, I would find a second read even more informative. Once again, I am glad that more books about Wales are being accessible for US readers. Thank you for the chance to read this!

Dr Danna R. Messer has published on various aspects of the wives of the native Welsh rulers before 1282, providing a gendered perspective of medieval Welsh politics. As an editor and historian, she is widely involved in medieval history and queenship studies generally, including her roles as Series Editor for Medieval History for Pen and Sword, editor for the Royal Studies Journal and editor for Normans to Early Plantagenet Consorts, the first volume of the forthcoming four-book series, English Consorts: Power, Influence, Dynasty (Palgrave). She is also Acquisitions Editor for Arc Humanities Press and the Executive Editor for the Encyclopedia of the Global Middle Ages, a partnership project with Bloomsbury Academic and Arc Humanities Press.