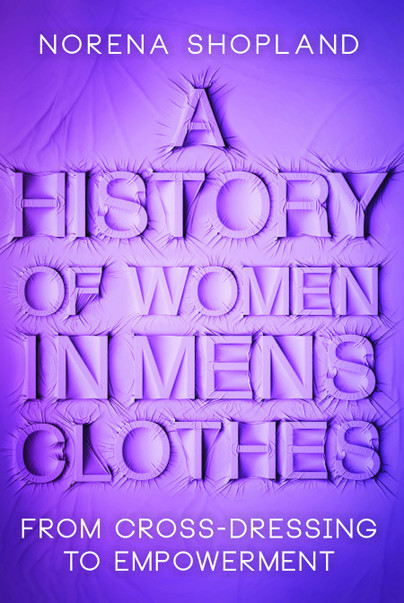 A History of Women in Men's Clothes (ePub)

Click here for help on how to download our eBooks
Add to Basket
Add to Wishlist
You'll be £4.99 closer to your next £10.00 credit when you purchase A History of Women in Men's Clothes. What's this?
Need a currency converter? Check XE.com for live rates

As featured on golwg360 - 'A historian specialising in the LGBT community in Wales has revealed that cross-dressing was "perfectly common" in Wales during the nineteenth century, contrary to what some would expect.'

The book was interesting: both informative and intriguing.

Norena uncovers the truth behind this attempt by women to bring normality into the wearing of trousers and other articles of male clothing by women into society, something that I always took for granted as being perfectly acceptable.

This is a meticulously researched and well written work which apparently came about from the author's research for a related project and covers a wide ranging and fascinating cross section of women who, through choice or necessity, used clothing and presentations traditionally reserved for men of the period. The introductory notes were fascinating and I recommend them highly. The author explains some of her methodology (with applicability to other queries and of undeniable usefulness to readers and researchers in other fields). Terminology/gender/pronouns are explained in the introduction as well and the author's choice of where and when to employ specific terms are explained clearly and logically.

The chapters are organised thematically and cover the reasons that women have chosen to dress and/or represent as men and include working conditions, protest, disinclination to conform to societal norms (and what the repercussions might've been). Although it's a layman accessible volume and the language throughout is understandable and engaging, it is rigorously annotated and the chapter notes and bibliography provide fertile material for readers to investigate further.

The book includes a number of photographs and facsimiles of drawings and news articles from the past with occasional background info or glimpses into a long vanished time. It would make a good selection for public or university library acquisition as well as support text for allied subjects such as gender studies. Fascinating stories from the past, well told.

Such a fabulous book. It was informative and intriguing in equal measure.
A thoroughly researched topic that was very eye opening.

A History of Women in Men's Clothes by Norena Shopland is a very well researched excursion through the history of oppression by regulating how a group of people can dress without either legal ramifications or social ridicule, or both. As Shopland states clearly, the bigger issue is women dressing "as men" rather than men dressing as women since only the latter is a threat to the idea of men as superior. Men dressing in women's clothes, as she states, is a step in a culturally backward direction, so while frowned on it was also less of a threat to patriarchy.


Highly recommended for those interested in feminist history as well as LGBTQI+ history.

I saw this pop up on Netgalley and was intrigued by its premise, as I've never seen a book about this subject, and now I am even more curious about the people who appear in this book as Norena Shopland brings them to life and our attention for the first time.

Informative and interesting, I also appreciated how Shopland reintroduced different case studies, but not in a way that is repetitive but reminiscent to take us back to previous moments in the book - something I find often happens in non fiction, however Shopland crafts this book incredibly well and keeps you fascinated from beginning to end.

A really intriguing and interesting book that explores the stories of women from across the world, Shopland really has delved deep to share the stories of the people who appear in this book. I feel so fortunate that now, it doesn't matter who gets to wear the trousers.

This book is a good look into the lives of the thousands of women across history in Europe and North America who adopted male clothes and/ or mannerisms for some period of time. It details many of the reasons why these things were often necessary, as well as touching on a few of the individuals who simply wanted to dress that way for personal affirmation. As a collection of historical anecdotes, it's very well researched and informative.

You've all heard the phrase, "Who wears the trousers?".

The answer to that is Women, whether they were allowed to or not.

A History of Women in Mens Clothes delves into the thousands of Women who history swept under the rug for carrying out their own forms of protest by forcing their way into a Mans world and refusing to be defined by their biology.

Some Women had to do this, to escape abuse and danger, others because they were finding who they are, others just because they could.

Easy to read, informative and a must-read for anyone who wants to know more about womens history.

This book is hilarious and horrifying. Did you know that women were banned in France from wearing trousers? If they wanted to wear “male” clothing they had to apply to the police and pay for a permit. The ban was overturned in… 2013!

The whole book is full of maddening little anecdotes about the way society treated (and still treats) women who deviate from societal expectations. At times, all you can do is to laugh to stop yourself crying. The book sometimes feels like a catalogue of Fragile Masculinity – as men of the age rage against women encroaching into “their” territory”. The fear that a woman might to as good a job as a man – as an employee or as a lover – is seen as an existential threat which must be crushed...


The book mostly draws from English-language reports, so is firmly tied to the Anglosphere – with occasional forays into France, Germany, and China. It is meticulously referenced, and contains some images of news cuttings to peruse.

Much like Miranda Kaufmann “Black Tudors”, it is a fascinating book which uncovers a facet of history which is often conveniently ignored.