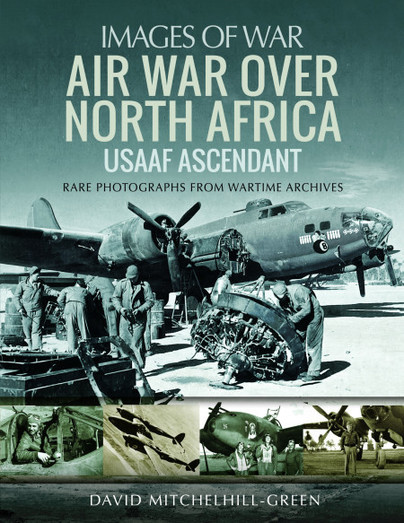 Add to Basket
Add to Wishlist
You'll be £8.00 closer to your next £10.00 credit when you purchase Air War Over North Africa – USAAF Ascendant. What's this?
+£4.50 UK Delivery or free UK delivery if order is over £35
(click here for international delivery rates)

The year 1942 began badly for the Allies. German U-boats were indiscriminately sinking merchant shipping off America’s east coast and in the Caribbean. Allied fortunes were no better in the Far East under the relentless Japanese advance. America was struggling to hold the Philippines, while the Soviet Union was fighting a series of bitter winter battles against Hitler’s Wehrmacht at the gates of Moscow. General Erwin Rommel’s surprise offensive in North Africa brought a renewed threat to the Middle East in mid-1942, which hastened the transfer of U.S. aircraft to Egypt to assist the beleaguered British.

The vast, sprawling deserts of North Africa were a new and strange terrain to American aircrew. Confronted by sand storms, flooding rains, extremes of temperature and primitive living conditions, the United States Army Air Forces were pitted against an experienced and determined enemy. U.S. air power nevertheless played a decisive role in the Allied invasion of Northwest Africa and the subsequent surrender of Axis forces in Tunisia in May 1943. Later bombing missions flown from North Africa struck Axis targets across Europe and supported the Allied invasions of Sicily and mainland Italy.

This book is a pictorial account of U.S. fighter aircraft and bombers — including the iconic B-17 Flying Fortress, P-38 Lightning and B-24 Liberator — and the aircrews that fought to establish ascendancy over North African skies and beyond.

Documentation of great historical interest for those interested in the Air War over the desert.

Now as most of you know from reading my previous reviews that I am a big fan of the ‘Images of War’ series, not only because it’s a book about planes or tanks solely, and this is my answer it’s about all the stuff that goes on around them in the photographs. It’s just a book about planes, its about the aircrew, the service crew, their kit and equipment, their locations and he people they encounter. It’s about the life that revolves around the plane, tank or whatever in the numerous photos of which there can be many, but put this together with them being high quality photos is why this series is so good.

The Air War over North Africa is no different, in fact it’s a slightly larger book than normal. The book is split up into chapters that look at the different sized aircraft involved along with their support crew, from the small and nimble single seaters to the heavy duty bombers. From the P-38 Lighting to the B17 flying Fortress, and discover how the Americans involved had to learn to deal with a whole different terrain and weather system than they were used to. This is another excellent addition to the series and with all of these they are all reasonably priced around the £15 mark. A very good 4.5 out of 5 for this particular book.

A smashing little coffee table book. Pen and Sword have produced just what you would expect from their stable an interesting and quality book loaded with Images some of which are quite rare.
David has trawled the archives to produce this photographic gem.

A book that in addition to the fantastic images (436!) stands out for the captions full of details and testimonies. A must for any aviation enthusiast!

a very interesting read and a book that I know you will want on your shelves.

The Images of War series is deservedly popular with its outstanding photo selections at remarkably low prices This new addition covers one part of the North African campaigns, where the USAAF were a critical part in the landings in the western area of North Africa – Most Highly Recommended.

Another volume in the ground-breaking Images of War series looks at how the USAAF slowly but surely became the masters of the North African conflict thanks to their B-17 Flying Fortress and the P-38 Lightning and the B-24 Liberator.

"This is a valuable addition to the ‘Images of War’ series. The photographs are of good quality and the overwhelming majority are new to me."

If you are interested in the USAAF in North Africa I feel this book will make you very happy with its purchase. There are a great number of period photographs that provide the content in a great number of setting and surprisingly good quality. The captions provided by the author are the unsung heroes of this title as some of these are longer than the chapter starting text and this results in the viewer being able to obtain far more information than the photographs alone provide.

Each chapter has a section of text on the different aircraft types, while the photos mostly have extensive and informative captions that are more extensive than we usually find in this series. The archive images are very well chosen, showing the aircraft of course, as well as so many of the pilots and aircrew, but also the maintenance work needed to keep them flying, and the extreme conditions in which they were all operating. Aviation historians will like this one, as well as re-enactors searching for uniform detail. It is the aviation modeller who will enjoy this most of all, as there is so much detail to be seen, a variety of colour schemes and some great ideas for dioramas.