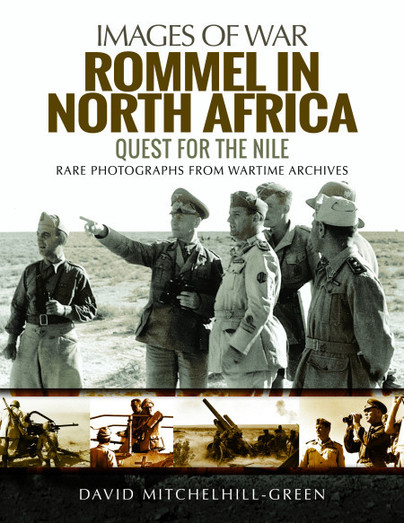 Quest for the Nile

As featured by Mail Online - On the frontline with Nazi troops in North Africa: Unseen images show Rommel's soldiers perched on a gun turret, climbing palm trees and riding camels

You'll be £8.99 closer to your next £10.00 credit when you purchase Rommel in North Africa. What's this?
+£4.50 UK Delivery or free UK delivery if order is over £35
(click here for international delivery rates)

Erwin Rommel is the arguably the most well-known German general of the Second World War. Revered by his troops and applauded by his enemies, the so-called Desert Fox achieved legendary status for his daring exploits and bold manoeuvres during the North African campaign. In this book, richly illustrated with over 400 images, the author examines the privations and challenges Rommel faced in leading his coalition force.

Endeavouring to reach the Nile Delta, we find Rommel's Axis soldiers poorly-prepared to undertake such an audacious operation. Much-admired by his men in the front lines, we discover a demanding and intolerant leader, censured by subordinate officers and mistrusted by his superiors in Berlin. Certainly no diplomat, we observe posed interactions with Italian and junior German officers through an official lens.

We note Rommels readiness to take advantage of his enemys weakness and study his extraordinary instinct for waging mobile warfare. We consider his disregard for the decisive factor of supply and view his armys reliance on captured equipment. We learn how this brave and ambitious commander was celebrated by German propaganda when the Wehrmachts fortunes in the East were waning. Conversely, analyse why Winston Churchill honoured him as a daring and skillful opponent. Finally, we picture this energetic, ambitious, at times reckless, commander as he roamed the vast Western Desert battlefield. This is the story of Rommel in North Africa.

Rommel in North Africa: Quest for the Nile focuses all information through Rommel himself, taking stock of the legend and leavening it with a dose of reality drawn from the writings of German officers who worked closely with him. The book’s purpose is not to narrate the details of the campaign’s battle history but rather to immerse the reader in the more intimate reality of Rommel’s role in the desert war, a task in which it succeeds admirably. The immense trove of photographs, most of which feel like they were taken from someone’s personal scrapbook, shows Rommel in every scene, inspecting troops and weapons, scouting the battlefield, and conferring with other officers. When paired with the diaries, reports and letters of men who served with Rommel, these quotidian images allow us to see through the veil of myth and discover the reality of the man and the campaign, not the propaganda or the hype.

Great resource for modellers and especially diorama builders with all the photos to choose from making it another quality release from Pen & Sword and their Images of War series.

While this is a book about the famous German General, Erwin Rommel, it is also a tremendous resource for modelers.

The historian interested in the war in North Africa will enjoy a fine collection of archive photos, many of which I had not seen before, while the modeller will find lots of interesting detail on uniforms and equipment.