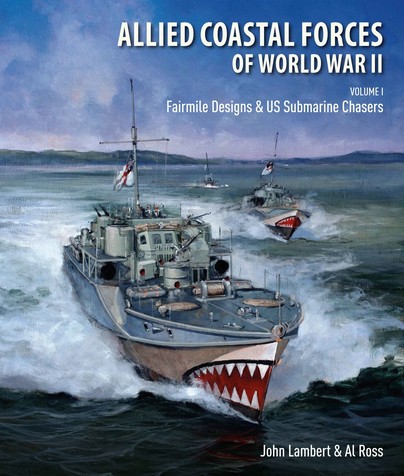 The major contribution made by Coastal Forces to the Allied war effort has had surprisingly little coverage in the literature of the Second World War. Motor torpedo boats, PT boats, motor gunboats, launches and submarine chasers served with distinction throughout the War, and in every theatre. They performed invaluable service as patrol boats, convoy escorts, minelayers and minesweepers, harbour defence vessels, light landing craft, RAF rescue boats and transports for agents and clandestine missions.

This first volume covers all the designs of the Fairmile Marine Company (including those craft built and equipped for Canada), together with the 72ft Harbour Defence Motor Launch and the US Navy 110ft subchaser.

The authors, firmly established as the recognised authorities on small warships, unearthed a remarkable body of information now included in this major work, and their finely detailed drawings, redrawn form original builders’ plans, offer an unparalleled view of all these remarkable designs. The new editions of their work will be welcomed by naval enthusiasts and modellers alike.

An excellent and authoritative work. No one else has attempted the level of technical history in Allied Coastal Forces, and Volume I remains an important source for anyone researching these boats.

This volume is the type of reference work that ship modellers and persons interested in the history of navies and small boat actions will likely want to own themselves, for ease of access and consultation. It is still among the best books on the Fairmile, a very useful and under appreciated wartime coastal craft.

This book contains a wealth of details for the naval enthusiast and/or model builder.

This really is a must have book for anyone interested in coastal warfare. There is nothing I can think of that is really missing from this coverage.

Allied coastal forces volume 1 could be read from cover to cover,but readers may prefer to use it as a reference book,locating items of interest via the contents as there is no index. The photos and drawings are of good to high quality; and the technical detail and data appear to be sound, I recommend the book to those interested in this fascinating in this fascinating class of small warship.

Having read Volume 2 first I came to Volume 1 with high expectations I was not disappointed. One could not help but be impressed with the massive research which must have been undertaken to produce such a wealth of detail. But more than that the information is presented in an easily accessible form.

Allied Coastal Forces provides a wealth of information that should be of interest to Merchant Navy readers as well as military history buffs.

This book is filled with superb technical drawings and crammed with detail. In addition to reviewing each Fairmile & US SC design in great detail, there are very detailed sections on engines, weapons and other equipment, together with lists of vessels built, and by which boat yard. This book really deserves the title of “definitive” and includes details of some of the survivors.

Over 250 pages packed with an amazing level of detail and a degree of research effort that can only be admired. Anyone with an interest in Coastal Forces, veterans, historians and modellers, this is a reference I think should really be on your reference bookshelf. I can't recommend this one highly enough.

As someone who has always admired the lines of the Fairmile Dog boats, this book is a delight. There is literally no aspect of the Fairmile range of Coastal Forces craft that isn’t covered. The early Fairmile A proved to be too slow to tackle E boats and they evolved into the heavily armed D Class with at least 2x6 pdr main armament, 4 torpedoes, twin 20mm and machine guns. The D Class were “the most potent and heavily armed coastal forces” of any navy. With a range of over 500 miles, it is worth pointing out that they carried over 5000 gallons of petrol with no armour.
The book has exhaustive details of construction including technical drawing; literally no detail is omitted. Sections on the individual types weapons, radar and engines are similarly detailed – I almost felt I could have done an oil filter change the drawings were so detailed. As these craft became more heavily armed, crew conditions were increasingly cramped. A section on habitability is a marvellous piece of understatement. Habitability in these small craft was always going to be a test – this was before the days of lightweight Goretex foul weather gear. The CO who filled his seaboots with warm water on the basis that if he was going to get wet, he might as well be warm is brilliant. The builders of these craft were small boatyards throughout the country. Many of them were peacetime yacht builders and in one case the woodwork was French polished not varnished.
The book has been supported by the Coastal Forces Veteran’s Association and their input is very evident. The photos are superb and the publishing standard is equally high. My only comment is that a photo of HMS Hornet talks of “Suicide Bridge” over Haslar Creek – I always knew it as “Pneumonia Bridge”! This book is fitting testimony to some extremely brave young crews who were mostly volunteers. Very highly recommended.

THIS encyclopaedic work examines Fairmile Motor Launch (ML) designs, Harbour Defence Motor Launches (HDML) and the US Submarine Chaser (SC) 497, their weapons, sensors and equipment. Every ML is listed, together with its in-service dates and production statistics by boatyard. The book was first published in 1990 with Seaforth Publishing making it available again in 2018.

The authors, John Lambert and Al Ross, firmly established and recognised authorities on small warships have included a remarkable body of information, together with their finely detailed drawings, redrawn from the original builder's plans, to offer the reader an unparalleled view of these remarkable vessels.