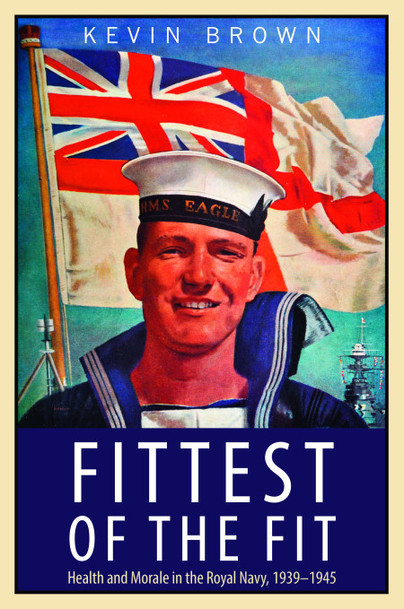 Fittest of the Fit (ePub)

An article written by the author for Dan Snow's History Hit: 'The Mental Health Impact of World War Two on British Sailors.'

You'll be £8.99 closer to your next £10.00 credit when you purchase Fittest of the Fit. What's this?
Need a currency converter? Check XE.com for live rates

‘Fittest of the fit’ was the Royal Navy’s boast about its personnel, a claim based on a recruitment process that was effectively self-selection. This book examines that basic assumption and many of the issues that followed from it.

Beginning with the medical aspects of recruitment, it looks at how health and fitness was maintained in the adverse environment of sea service, including the particularly onerous extremes of Arctic and Tropical conditions, and life for its submariners and airmen as well as those in the surface fleet. The massive mid-war expansion of personnel was a particular challenge to accepted wisdom and how the Navy coped is a major aspect of the story.

Beyond the purely physical, the importance of psychological factors and the maintenance of morale is another theme of the book, taking in everything from entertainment to tolerance of onboard pets. Inevitably, the effects of battle, injury and stress dominated naval medicine, and action experience led to rapid changes in everything from basic preparations to protective clothing. In a conscious search for improvement, the Navy became an early adopter of many medical innovations, driven by a permanent committee created to study personnel issues.

To put this all into context, comparisons are made with the other British services as well as US Navy practice. From this emerges a rounded picture of a crucially important factor in the wartime success of the Senior Service.

Much is covered in this fascinating book, which leaves the reader having simultaneously learned a lot and curious to learn more.

The author is an obvious admirer of the medical branch and its contribution to the fighting efficiency of the service. He has written before on naval medicine and as curator of the Alexander Fleming Museum at St Mary’s Hospital, does so with authority and has produced a very readable and interesting book. It is strongly recommended to members of the Naval Review with any interest in personnel matters, not just naval medicine.

The author and publisher are to be commended for providing a study of the much neglected subject of sailors’ fitness. The Royal Navy has long recognized the importance of its sailors maintaining the highest levels of health and morale even if historians have generally neglected this critical area of the ability to wage war – Very Highly Recommended

This remarkable book looks at how the Royal Navy coped with keeping the physical and mentl health of recruits in tip top form during the second world war. The Royal Air Force had the reputation for attracting the more glamorous recruits, but it was the Navy that became known as the "Senior Service", and this book, expertly written by Kenvin Brown, explains why that was so. Fascinating.

Many books have focused on operations and battles conducted by the Royal
Navy, but finally there is a book which sheds light on what it was really like
to serve in the Royal Navy. Fittest of the Fit lets the reader know what it was
like day to day serving in the navy in World War II. I have been asked so many
times if I can provide details about what someone did aboard ship, of course
I am not able to do so. This book however will enlighten the reader as to what
training and every day life was like. It covers virtually every aspect of how the
average rating lived. Covering health, food, those left at home, sex and much
more. For anyone wanting to know what is was like for their relatives serving
in the Grey Funnel Line this is the book that will tell you.

Fittest of the Fit is a very readable book and provides a most comprehensive coverage of the vast Royal Navy in World War 2. As the RAN was organisationally the same as the RN, and had British ships, Australian naval medical staffs and ships’ companies shared many of the same experiences.

This book is a very human story and should interest not only medical professionals and the wider naval and military community, but anyone interested in large and complex organisations operating under extreme conditions and stress. Your humble reviewer can do no less than highly recommend Fittest of the Fit.