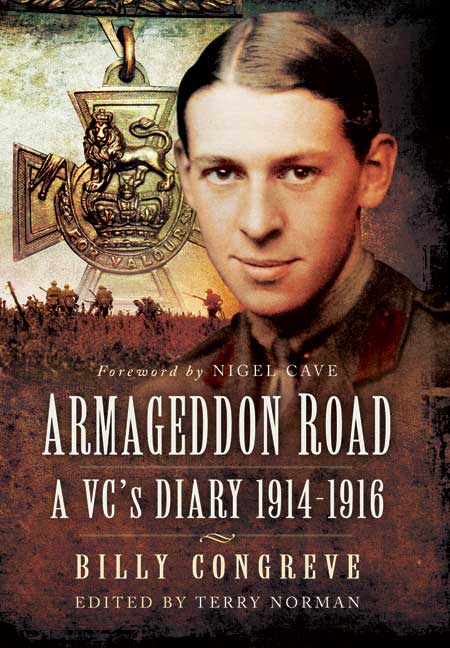 Add to Basket
Add to Wishlist
You'll be £13.99 closer to your next £10.00 credit when you purchase Armageddon Road. What's this?
+£4.50 UK Delivery or free UK delivery if order is over £35
(click here for international delivery rates)

Billy Congreve was an exceptional soldier and an exceptional man. By the time he was killed on the Somme in July 1916 at the age of twenty-five he had been awarded the DSO, MC, and the Légion d'Honneur, and for his many deeds of gallantry on the Somme, a posthumous VC.

Born into a military family (his father General Congreve had also won the VC) he became a regular soldier in the Rifle Brigade before the war, and in France became a staff officer, but one who chose to be in the front line as often as he could. This makes his remarkable diaries all the more valuable since he writes from the thick of the fighting and yet retains an objectivity that enables him to observe all that is going on around him both in the trenches and at headquarters.

Terry Norman carefully edited the diary to set his story in the context of the war, and thus provide an exceptional picture of what an officer thought of the conduct of the war side by side with his personal grief at the loss of his friends and the wastage of human life.

Out of print for over 30 years, this special centenary edition of this classic work includes a new foreword from esteemed military author Nigel Cave, as well as an expanded introduction from Terry's widow, Joan and a newly designed plate section. Detailing the extraordinary exploits of a truly remarkable man during the first two years of the war, this book is a compulsive purchase for all fans of the period.

This is a well-written account by a modest man who exhibited extreme gallantry on multiple occasions and who unfortunately did not live to tell the tale. His words though, conveyed through the beautifully produced new edition of his diary, are a fitting epitaph.