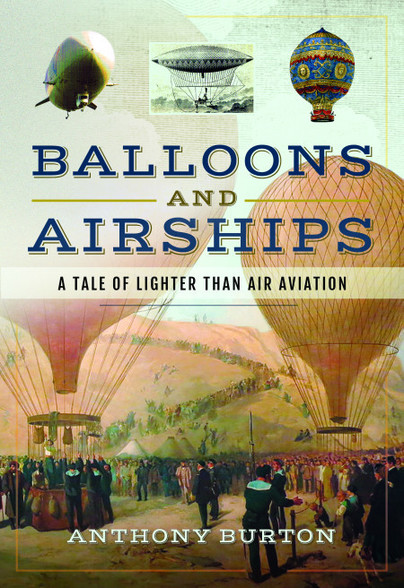 A Tale of Lighter Than Air Aviation

Click here for help on how to download our eBooks
Add to Basket
Add to Wishlist
You'll be £9.98 closer to your next £10.00 credit when you purchase Balloons and Airships. What's this?
Need a currency converter? Check XE.com for live rates

This book tells the often dramatic and always fascinating story of flight in lighter than air machines. For centuries man had dreamed of flying, but all attempts failed, until in 1782 the Montgolfier brothers constructed the world’s first hot air balloon The following year saw the first ascent with aeronauts – not human beings but a sheep, a duck and a cockerel. But it was not long before men and women too took to the air and became ever more adventurous. The aeronauts became famous giving displays before crowds of thousands, often accompanied by special effects.

In the early years, ballooning was a popular pastime, but in the 19th century it found a new use with the military. Balloons were used to send messages out during the Siege of Paris and later found a role as observation balloons for the artillery. But their use was always limited by the fact that they were at the mercy of the wind. There were numerous attempts at steering balloons, and various attempts were made to power them but it was the arrival of the internal combustion engine that saw the balloon transformed into the airship. The most famous developer of airships was Graf von Zeppelin and the book tells the story of the use of his airships in both peacetime and at war. There were epic adventures including flights over the poles and for a time, commercial airships flourished – then came the disaster of the Hindenburg. Airships still fly today and ballooning has become a hugely popular pastime.

The author has an extensive background in aviation and his commentary on navigation added to the depth of the subject covered, especially when discussing the long-distance flights of balloons and airships in the early 1900s and post-Great War. I found the whole narrative fascinating and spent two long periods just engrossed. And now I’m up way past my bedtime to tell you all about it.

Highly illustrated and printed on glossy paper, this is a book that looks good and feels good in the hands.

Burton achieved his objective of telling most, if not all, of the story of LTA aviation.

As it’s on my Bucket List – a flight in a hot air balloon – this book was an appealing read. Burton tells the dramatic and fascinating story of flight in lighter-than-air machines. For centuries man had dreamed of flying, but all attempts failed, until in 1782 the Montgolfier brothers constructed the world’s first hot air balloon. The following year saw the first ascent with aeronauts – not human beings but a sheep, a duck and a cockerel. But soon men and women took to the air and became ever more adventurous. With the arrival of the internal combustion engine the balloon was transformed into the airship. The most famous developer of airships was of course Graf von Zeppelin and his airships were used in both peacetime and at war. There were epic adventures including flights over the poles and for a time, commercial airships flourished – then came the disaster of the Hindenburg.

This is a very entertaining book, covering a key period in the development of manned flight, and even if it doesn’t have a massive amount of directly military material is still of great interest.

A fascinating and delightful review of the history of lighter than air aviation from its first days through to today. This well written text is supported by images throughout the body of the book, mostly in full colour on gloss paper . – Very Highly Recommended.

This is a timely publication, coinciding with the release of the new blockbuster movie The Aeronauts, starring the great Eddie Redmayne, as it tells the true stories of flight pioneering in balloons and airships. Absolutely enthralling.

As featured on SF Crowsnest

This is a very good book, an excellent amount of pictures and information. The information doesn't go too far deep or get so technical but just enough to entice the reader and keep them interested. The stories go right back to the start of flight at the beginning when airship/balloon travel we're in their infancy. I often think it was a shame that airship didn't make it to worldwide everyday travel but I suppose you can the main problems. I really enjoyed the book, especially the history of the subject but then that's by area. I would recommend this book to both the passing reader and the avid airships fan.

Tells the often dramatic and always fascinating story of flight in lighter-than-air machines.

I enjoyed this book. I found it highly informative yet it doesn’t get bogged down in minutiae. Anthony Burton writes with a conversational tone and with some humor. In terms of subject matter, it is similar to John Swinfield’s Airship, but the latter more concentrated on the British airship program while the Burton effort was broader scope. They are both fine books and I recommend each of them.

It educated, entertained and engaged. Triple E. And now I’m quite well informed on the subject too... So yeah, really enjoyed this book, it was succinct, well written, informative, interesting and provided a deliciously ample supply of visual aid, be it art or photos. Seriously, so many nonfiction books skimp on visuals, it really deserves kudos how generous this author was with his audience. This book is just as good as the word dirigible, which is an absolutely terrific word. Well worth a read.

Great book that takes the reader through the early days of the Montgolfier brothers to von Zeppelin to the modern era of non-rigid airships. Hot air balloons were instrumental in getting messages out of Paris during the Prussian siege, then dirigibles were used for reliable transportation and, unfortunately, the bombing of cities in the First World War...then back to commercial transportation.. I'm middle-aged and still fascinated when there's a blimp in the air, so I enjoyed this book thoroughly.

This gives you great insight into how much work it took to get us into the air. I loved learning about all the things and it was fun.

While landing at Lakehurst, New Jersey, on 6 May 1937 on its first transatlantic crossing of the year, the German airship Hindenburg burst into flames and was destroyed, killing 36 of the 97 persons aboard.