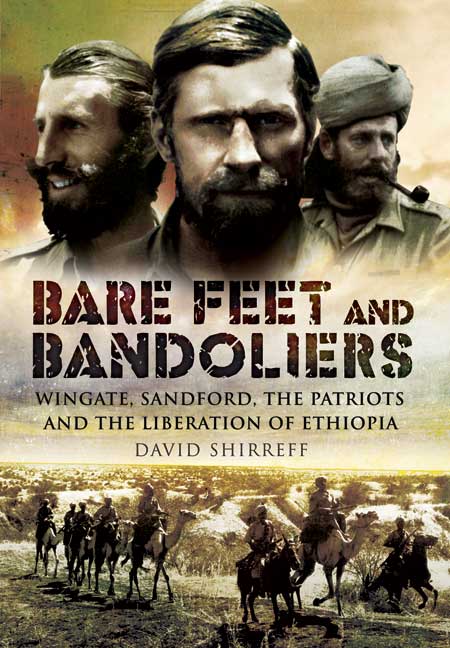 Wingate, Sandford, the patriots & the Liberation of Ethiopia

Add to Basket
Add to Wishlist
You'll be £25.00 closer to your next £10.00 credit when you purchase Bare Feet & Bandoliers. What's this?
+£4.50 UK Delivery or free UK delivery if order is over £35
(click here for international delivery rates)

This is the story of two remarkable 'firsts'. It is the story of the first successful attempt by Allied forces during the Second World War to support and sustain a local resistance movement with regular forces in enemy-held territory.
It is also the story of how Ethiopia became the first nation conquered by the Axis to be freed.

The campaign in Ethiopia might appear small in relation to the war in the whole of East Africa, but it had great military importance. In 1941 the British Commonwealth, the Indian and Sudanese forces, with the Patriots - local chiefs and their followers who resisted the Italian occupation - advanced into Italian East Africa and defeated the Italian armies. David Shireff, who himself served in the campaign, gives an evocative and impressive account of how Colonel Orde Wingate with his Gideon Force was able through bold and imaginative command to force the
surrender of a large part of the Italian forces. Shireff also explores the role of Brigadier Daniel Sandford, now an almost forgotten commander, in organizing his Mission 101 and the sustained rebellion of the Patriots.

On 6 April 1941, Addis Ababa was liberated by General Alan Cunningham's force. Emperor Haile Selassie made a formal entry to the city on 5 May. This was five years after being forced to flee when the Italians captured his capital on 5th May 1936 during the Second Italo-Abyssinian War.