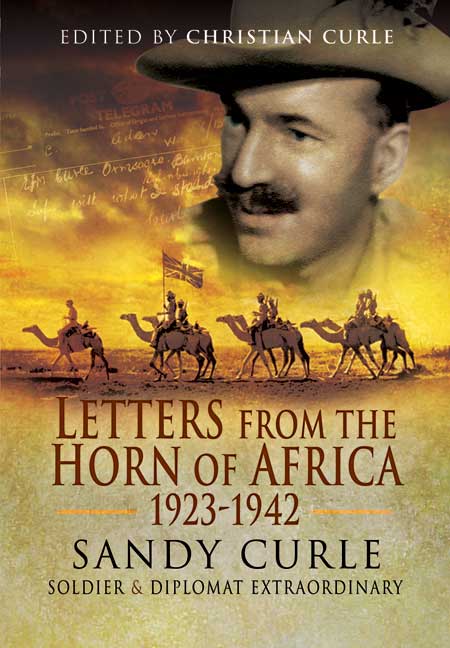 After brief service in the Gordon Highlanders as part of the Army of Occupation of the Rhine post Great War, Sandy Curle sought more adventurous soldiering and in 1923 was seconded to the King's African Rifles (KAR). Aged 23 he found himself in remotest Somaliland in sole charge and the only European for miles. At one point delirious with typhoid he was only saved by the surprise visit of an Indian doctor. Later he served in Kenya and undertook numerous military expeditions.

In 1929 Curle joined the Colonial Service again in Somaliland and Ethiopia. He witnessed the Italians' aggression which led to their invasion of Ethiopia in 1935. A spell in Tanganyika as a District Officer followed and on the outbreak of war he rejoined the KAR and was attached to the Somaliland Camel Corps when the Italians invaded. Hopelessly outnumbered, Sandy and his men withdrew to Kenya by troopship.

His next assignment was to raise, train and command a battalion of Ethiopian irregulars (Curle's Irregulars) and with these he led the re-occupation of Ethiopia winning the DSO and Ethiopian Military Medal.

In 1966 Curle was one of 25 veterans invited by Emperor Haile Selaise to celebrate the 25th Anniversary of the liberation from Italian rule.

This is a vivid and fascinating collection of correspondence covering some 30 years of war and uncertain peace.


Pen & Sword have done an excellent job in making these letters available to their readership. The product is of a very high quality and the layout clean and simple with nothing to detract from the substance of the book, which gives a fascinating insight into the life and experiences of an extraordinary soldier and diplomat.

andy’s letters home to his father cover the period from 1919, immediately after his being commissioned into the Gordon Highlanders, through his secondment into the King’s African Rifles, his time as an Administrator in Kenya and Somaliland, Consul in Abyssinia, Political Officer and Assistant British Commissioner on the British Somaliland-Ethiopia Boundary Commission, District Officer in Tanganyika and return to the Army in 1939, when he raised his own regiment of ‘Irregulars’ to fight the Italians on the Northern Kenya-Southern Ethiopia border.
His lifestyle is far from the customary idea of British Colonial life; more Indiana Jones than Raffles. He makes light of the discomfort and hardship of living under canvas for months on end but is excited by his botanical and archaeological finds, many of which were unique and original and still to be found in British botanical gardens and museums in Africa and at home.
His daughter, Christian Curle, who edited the letters, provides contextual notes where these add to the reader’s knowledge and understanding. She does this in such a way that they do not become obtrusive or detract from the substance of the book. The letters themselves tell us not only about Curle but give us a fascinating insight into the long build up to World War II. From Curle’s viewpoint, this seemed inevitable. They also show the potentially catastrophic gulf in understanding and experience between those on the ground and the theoreticians giving them orders. Curle was a practical man who made things happen. The War allowed him to shine.
The letters give a full sense both of his satisfaction in a job well done and his frustration at being thwarted by bureaucracy. The book presents an opportunity to learn about a period and area of the British Empire which are often forgotten or ignored and as such is a valuable resource for anyone interested in this corner of Africa, or indeed the extraordinary life of a British Colonial ‘adventurer.’ Pen & Sword are to be congratulated on their decision to publish this work and on its execution.