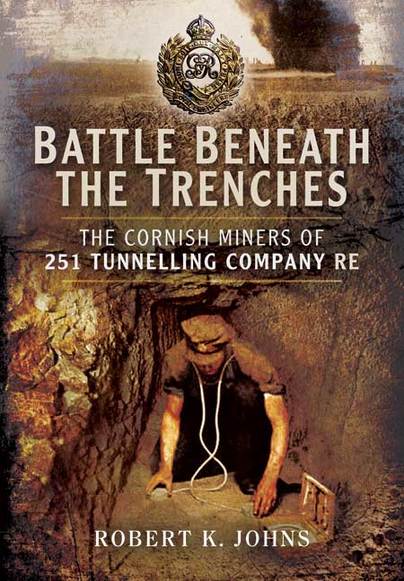 Battle Beneath the Trenches (ePub)

The Cornish Miners of the 251st Tunnelling Company, RE

Winner of the Holyer an Gof Publishers’ Award 2016 in the Non-fiction – History, Language and Creative Arts category

You'll be £4.99 closer to your next £10.00 credit when you purchase Battle Beneath the Trenches. What's this?
Need a currency converter? Check XE.com for live rates

Undermining the positions of the enemy is one of the most ancient activities. For almost 3000 years even before 1914, it was a popular siege-breaking technique. During the Great War, arguably the greatest siege the world had ever seen, it presented a conflict environment that perfectly favoured the skills of the military miner. During 1915, the Western Front was established as a static line that grew into a huge network of defence-in-depth earthworks. Siege conditions demanded siege tactics and as the ground was everywhere mineable, the Western Front was a prime candidate for underground warfare.

In February 1915, eight Tunnelling Companies were created and operational in Flanders from March 1915. By mid-1916, the British Army had around 25,000 trained tunnellers, mostly volunteers taken from mining communities. This is their story.

Winner of the 'Best History and Non-fiction award' at the Holyer Annual Gof awards!

The brown cover of the book with the photos on the front and back give a good indication of the contents. This book should appeal to a varied readership. Not only those interested in family and local Cornish history but also mining techniques and living conditions in the trenches. The book would also suit any reader with a general interest in the First World War.

The book is easy to read and includes maps with reference to them in the text for the convenience of the reader. There is an index, bibliography and comprehensive appendices with names of officers, men and honours won.

This book tells the story of the Cornish Miners who were recruited to fight a new underground war deep below the trenches. The book contains many illustrations, mostly photographic, and original, to support the readable text. A good combination that holds the readers attention and graphically describes the tense and terrifying war below ground where miners and counter miners fought hand to hand in near total darkness, or exploded a counter charge entombing the enemy. Even for men used to working deep beneath ground and sea to extract tin and other mined materials, this was nerve-wracking work. A valuable and well-researched book that provides a unique insight into a much under-reported form of combat.

A well written account of one of the specialist tunnelling companies of the Royal Engineers; the 'Cornish Miners Battalion', who put themselves at risk every day by burrowing beneath the earth on the Western Front to undermine the enemy's positions. This is a vivid and well researched unit history of men who were recruited from the tin mines of Cornwall to play their part below the trenches and no-man's-land, often in appalling conditions, as they sought to give an advantage to their infantry brothers fighting above them.

' A Worthy addition to any Cornish library, the book is well researched...'

' He tells some wonderful stories of the men who served...'

A fascinating and well written book.

'Well researched... wonderful stories of the men who served...'

'... fascinating story of these brave men.'

'Mr Johns... tells some wonderful stories of the men who served...'

'This book is well researched and Mr Johns tells of his visits to the tunnels which still exist...'

This is a brilliant book about an overlooked aspect of the war. Well researched and a must read, especially for those interested in the Duke of Cornwall Light Infantry.

A most informative and well researched book. The writing style made it a pleasure to read and was so vivid I could almost smell and feel the dank air of the life these brave men led.

This is a fascinating book about the real lives of Tunnellers on the Western Front. It concentrates on the Cornishmen of the 251st Tunnelling Company and their remarkable achievements, but is told in such a way that makes it extremely interesting to read, irrespective of whether your interests lie in military mining, or local Cornish history. It is different to others in that it follows the Company from its formation to its disbandment, but from a soldiers perspective.

It has obviously been very well researched, and is packed full of good information.

An excellent book. My immediate response, before I had read a word was the simplicity, clarity and relevance of the maps, all cross referenced in the text, the extensive range of quality photographs matched to and positioned by the text. I have read several books on the history of World War 1 mining. Yours, refreshingly, concentrated on the well researched events of the 251st and its people. The appendices were each a well researched book in their own right. You should be proud of your efforts.

Robert K Johns is a retired businessman who has spent many years working closely with military authorities worldwide, undertaking many research projects on their behalf. He was born in Cornwall and comes from a long line of underground tin miners. On discovering that his grandfather had been a a tunneller in the Great War, Robert researched extensively into his life, and using many authenticated records and archives, he has traced the history of 251 Tunnelling Company from its establishment in Cornwall to demobilisation. He is currently working on another book looking at the individual stories of some of these men.