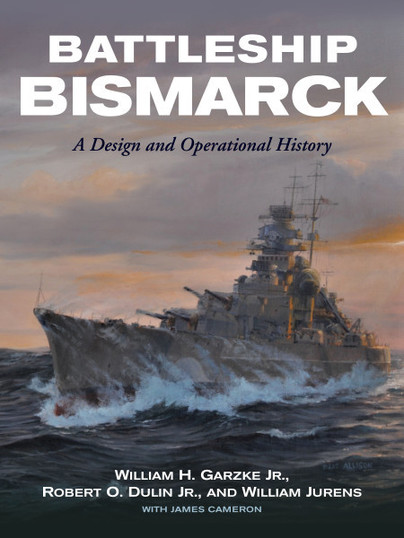 Click here for help on how to download our eBooks
Add to Basket
Add to Wishlist
You'll be £24.99 closer to your next £10.00 credit when you purchase Battleship Bismarck. What's this?
Need a currency converter? Check XE.com for live rates

This new book on Bismarck offers a forensic analysis of the design, operation and loss of Germany’s greatest battleship and draws on survivors’ accounts and the authors' combined decades of experience in naval architecture and command at sea. Their investigation into every aspect of this battleship has taken fifty-six years of painstaking research, during which time they conducted extensive interviews and corresponded with the ship’s designers and the survivors of the battle of the Denmark Strait and Bismarck’s final battle. Albert Schnarke, for instance, the former gunnery officer of Tirpitz, Bismarck’s sister ship, aided the authors greatly by translating and supplying manuscript materials from those who had participated in the design and operations. Survivors of Bismarck’s engagements contributed to this comprehensive study including D B H Wildish, RN, damage control officer aboard HMS Prince of Wales, who located photographs of battle damage to his ship.

After the wreck of Bismarck was discovered in June 1989, the authors served as technical consultants to Dr Robert Ballard, who led three trips to the site. Film maker and explorer James Cameron has contributed a chapter, which gives the reader a comprehensive overview of his deep-sea explorations on Bismarck and it is illustrated with his team’s remarkable photographs of the wreck.

The result of nearly six decades of research and collaboration, this new work is an engrossing and encyclopaedic account of the events surrounding one of the most epic naval battles of World War Two. And Battleship Bismarck finally resolves some of the major questions around her career, not least the most profound one of all: ‘Who sank the Bismarck, the British or the Germans?’

All in all it’s a very impressive achievement.

A little to my surprise, I found this book to be a thoroughly good and authoritative read.

This is a masterful work, very carefully researched and beautifully presented, and it is hard to see how it will ever be bettered. If you are interested in the Bismarck and in the ghastly events of Spring 1941, you will find no single better account than this.

I've never seen such a comprehensive book of reference - the scope of the coverage is phenomenal. I've read nearly all of the book and, in my mind, was transported to the Atlantic Ocean, in terrible weather, to follow the anxious saga and bravery of all concerned in the events described.

An outstanding new addition to the history of the Bismarck and it’s short service history. Superbly written, very engaging and interesting. A BIG book in every respect, but as hard to put down as it is to pick up.
The section on the development of the German fleet after the Great War was particularly good and very freshly written
Worth every penny.

No hesitation about this one. It is magnificent. A big, expensive, superb book. Very detailed. Lots of photographs, maps, diagrams, plans, tables. And written by people who really know their subject. All naval architects. Very readable, but probably not in one session. In fact, I have read it, selecting sections almost at random, then finding it very difficult to put down.

This superb book, IMO, is destined to become THE authoritative account of conception, design, building, brief naval history and destruction of one of the most famous ships ever.

The attention to detail of the authors is most impressive. They clearly love their subject, but the battle is presented with objectivity as well as a sense of quiet passion. They seek to tell us about every facet to ensure the complete story is told, not just a simplistic account... We don’t do a ‘books of the year’ feature at WHO these days, but if we did this one would be high on the list of candidates. Very highly recommended.

The depth of content, detail and analysis of all aspects of Bismarck’s birth, life and death cannot be fully justified in these few words of review. What it does is provide a fitting memorial to this doomed ship which pitted itself against the might of the RN, regarded as a deadly threat which had to be destroyed regardless of cost. The torpedo, dropped from a flimsy, fabric covered Fairey Swordfish at the limits of endurance, might have just been a pinprick against the ship’s armoured belt; however, it struck a strategic point jamming the steering mechanism. Unable to manoeuvre as a result of this incredible hit, Bismarck expired in agony under overwhelming fire from the avenging RN battle fleet. Bismarck is remembered as a brave ship which died with colours flying, sadly in the service of an evil regime.

Battleship Bismarck is a truly formidable biography; a mighty memorial to a mighty ship.

After an epic 56 year period of research, the heavyweight history of the Bismark must be the definitive book on this subject. This beautifully produced book, with its fabulous selection of photographs, charts and drawings is not to be missed – Most Highly Recommended

This is a most remarkable book. The three authors have done an incredible research job in pulling together probably all there is to be known about the Bismarck. The bibliography includes over three hundred items ranging from previous Bismarck books, interviews with authorities, to American, German and British government documents. The result is encyclopaedic with the narrative covering the first concept of the design within the German navy’s developmental path to the survivors stories and on to the exploration of the wreck site. The political inputs to the saga particularly from Hitler and Churchill are covered. Other German military assets and actions as well as their parallels in the Royal Navy are given good coverage so as to place the design and operation of the Bismarck in its full context. Supporting the written word are masses of photographs, suitable maps and technical drawings. The index is most comprehensive and makes this a superb reference work.

What raises the book to an even higher level is the extensive forensic analysis of the wreck site bringing the story right up to date. Physically this book is impressive weighing in at 7lbs [just over 3 kg] measuring 310mm by 240mm and 40mm thick.

This work will sit well on the bookshelf of everyone with an interest in the amazing Bismarck saga both as a jolly good read and as an important reference work.

The most iconic of all of the WW2 battleships and possibly the greatest such vessel the world has ever known. I remember reading a book called Sink the Bismarck way back in the 1950s - it is a privilege to relive the era in which the vessel sailed and fought. The question remains, did the British and allied forces sink her, or was she scuppered by the Germans? A fantastic history of a great warship.

This is a stunning book, chock-full of a staggering degree of information, including a good deal of info on and testimony from survivors and adversaries.

This offering from Seaforth Publishing is an incredible insight into the story of the Bismarck and her demise. The text is well written and does a very good job of telling the story of this impressive vessel warts and all. The diagrams provided help the reader to understand what the text is telling you and are especially helpful when it comes to indicating the damage received. The photographs of the Bismarck and other vessels are great inclusions and well chosen by the authors. The contribution from James Cameron showing the Bismarck on the ocean floor provides the user some idea of the final hours of what it was like to be on the Bismarck the day the war caught up with her.

The scope and breadth of this title is simply astonishing. It matters not whether you are interested in scale modelling or not, if you have any interest in WW2 then this title makes a huge contribution to the history, facts and narrative.

I have to declare that I’m no specialist in naval matters, not even a naval scale modeller, my interests lie in matters aviation. What is astonishing to me is just how quickly I was drawn into the book, its readability, clarity and style are magnificent. Pick any section and you’ll be absorbed and hooked on what comes next...

This title is, I am bound to say, possibly the best book I have ever seen on any subject – it’s that good in my opinion.

James Cameron is a Canadian film maker and deep-sea explorer.

Robert O Dulin is a graduate of the US Naval Academy and later earned his MS in naval architecture and marine engineering from MIT.

William H Garzke is a graduate of the of the University of Michigan with a degree in naval architecture and marine engineering.