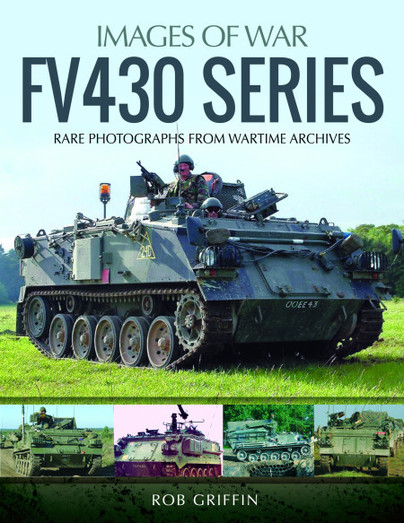 Click here for help on how to download our eBooks
Add to Basket
Add to Wishlist
You'll be £4.99 closer to your next £10.00 credit when you purchase FV430 Series. What's this?
Need a currency converter? Check XE.com for live rates

The latest book in the “Images of War – Rare photographs from Wartime archives” series (Perhaps not totally appropriate for this title) is about the post-war FV 430 series Armoured Personnel Carrier as used by the British Army. Introduced into service at the height of the Cold War the FV 430 series was developed into a variety of specialised vehicles that served in a number of guises for over 50 years. Author Rob Griffin certainly knows his subject. Having served as an AFV crewman his text is informative and sprinkled with sufficient anecdotes to ensure the book is an easy read.
Chapter one looks briefly at the development of armoured troop carriers going from an adapted Mk IX, through the Carriers and turret less tanks of World War II, to the outdated Oxford Carrier and the FV400 and FV420 series through to the FV430 series of APCs. Chapter two describes the FV 432 Mk1-2 and concludes with a series of photographs showing the interior of vehicles being manufactured or refurbished.
Chapters three and four form the majority of the book with the former looking at Trials and Service and the latter at Variants. Chapter three examines a trial run by the Australian Army where the FV 432 was tested against the American M113. This trial did not go well for the FV432 and this goes someway to explain why this APC was never exported despite many years of service with the British Army. As with the other chapters there are a number of well captioned colour photographs. These show mainly the FV432 but also other variants on exercise and at war in the Gulf.
Chapter Four describes the numerous variants of the APC that includes fitting WOMBAT and Carl Gustav as well as the major variants like the FV 433 Abbot Self Propelled Gun. There are many good colour photographs at the end of this chapter but the layout is confusing with photographs of the various types jumbled up together. Not the authors fault but a shame as this distracts from the overall high quality of this book.
The final chapter is entitled “Growing Old Gracefully!” and looks at some examples of the APC that have either ended up either as Range Targets or have been loving restored by enthusiasts. The photographs show many sad examples of range hard targets (This includes the last example of an FV 431) but there are some photographs of some intriguing conversions including the “stretched limo” complete with champagne chiller and a glass paneled hearse!
Military model makers will find much to interest them in this book. The text is well written and there a good selection of photographs marred by not being put together in a logical sequence. But this is only a minor issue and many Post War AFVs enthusiasts will find much of interest in this book.

The last section, ‘Growing Old Gracefully’, is interesting, looking at the various fates that have befallen these vehicles once retired from active service, from range targets to a hearse! A really good volume for anyone interested in post- War British army. Highly recommended.