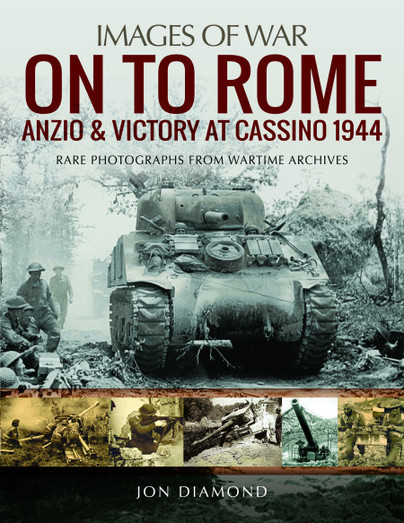 Click here for help on how to download our eBooks
Add to Basket
Add to Wishlist
You'll be £4.99 closer to your next £10.00 credit when you purchase On to Rome: Anzio and Victory at Cassino, 1944. What's this?
Need a currency converter? Check XE.com for live rates

Early in 1944 the Allied advance was halted by the German defence of the Gustav Line. Even with the deployment of Eighth Army reinforcements from the Adriatic, every effort to capture Monte Cassino failed.

Fifth Army’s VI Corps’ amphibious landing at Anzio in January, while initially successful stalled in the face of formidable German counter-attacks and the beach-head was effectively besieged.

The stalemate at Anzio and along the Gustav Line was finally broken in mid May by the Allied Spring offensive. After bitter fighting and the total destruction of the famous Benedictine Abbey, the Germans began their withdrawal towards Rome. Days later the reinforced VI Corps broke out of the Anzio bridgehead and linked up with Fifth Army units on 25 May. But by evading the Allied attempt to trap them south of Rome and despite Rome being occupied by the Allies in early June the bulk of the German 14th Army lived to fight another day. The Italian campaign had another nine costly months to run.

This superbly researched account traces the course of the bitterly fought battles between January and June 1944 in words and images.

The production standard is high and the photo reproduction good. Put that with plenty of text about the campaign and this represents a good value for money, graphical look at the fighting in Italy.

Another fine set of photos from the Italian campaign, accompanied by very readable text from author Jon Diamond that gives a good understanding of the historical events. A good example I think of why the Images of War series has proved so successful.