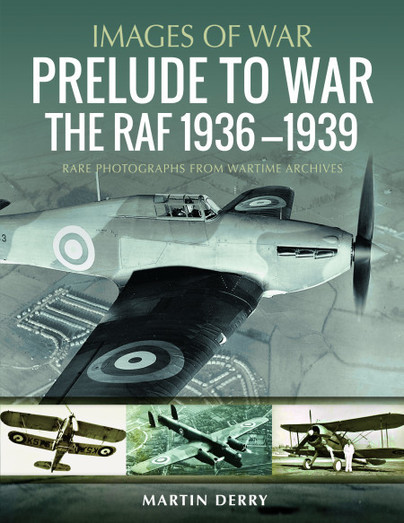 Through the use of contemporary photographs and informative captions, Prelude To War: The RAF 1936-1939 chronicles many of the RAF’s aircraft that continued to serve in the years immediately preceding the start of hostilities in 1939, a period of rapid technological change and mechanical innovation at a time when many European nations held their collective breath as, yet again, they witnessed the steady rise of German militarism and, ultimately, conquest.

Forced to take note of this emerging threat the British government authorised a policy of modernising and re-equipping Britain’s armed forces. This process, frequently confusing and fitful, was by 1936 taking shape with the RAF at the forefront of modernisation, although as Winston Churchill solemnly noted in 1937, ‘It was no longer in our power to forestall Hitler or to regain air parity. Nothing could now prevent the German Army and the German Air Force from becoming the strongest in Europe…we could only improve our position. We could not cure it’.

To this day, isolated perceptions still linger to the effect that by September 1939 the RAF had become an all-monoplane force with Fighter Command fielding countless squadrons of Hurricanes and Spitfires ready to overwhelm any enemy insolent enough to enter British skies. Similarly, the same perceptions suggest that a confident Bomber Command stood ready to darken German skies with armadas of modern bombers. These notions were wide of the mark – such was the power of propaganda!

Certainly, numbers of monoplanes did exist, but until the aircraft industry could expand to cope with the demands of a modern war, fleets of obsolescent biplanes had to be employed in secondary roles, with others remaining in the frontline until monoplanes could replace them: there was no other choice.

It is hoped that this modest work will shed light on some of the RAF’s better known aircraft of the period, but more particularly upon those that remain virtually unknown today and which might be described as having ‘also ran’.

There are lots of interesting details to be seen, especially of those aircraft that had lingered on in service overseas where they had to carry everything, including the kitchen sink, strapped to the fuselage! I thoroughly enjoyed this book... finding new photographs of RAF subjects that are new is rare, I was pleased to find this book which certainly provided me with quite a few new photos, and as such can be wholeheartedly recommended.

Overall, this is an excellent book that is both useful as an historical reference and also of interest to the casual reader - it's well put together and the photographs are well chosen and described, if you want to learn the difference between a Saro London and a Blackburn Botha then look no further.

This offering from Pen and Sword as part of the Images of War series is a great release and a must for any modeller interested in the RAF during the interwar and early years of World War 2. This title covers aircraft I have not heard of before let alone seen and as such make it a gold mine for the modeller. The captions are very well written and the images have been well sourced.

The book is a feast for the eyes, as many of these planes are little known even to professionals. The photos are very beautiful and there are more than 200 of them, while the captions of each photo clearly explain the fate of each aircraft, which, as you can imagine given the period in question, often found an inglorious end being decommissioned or falling due to some accident. and not in battle. However, this does not detract from the charm of many of these aircraft as the period in which these photos were taken was a period of great expansion for the Royal Air Force, a period that nevertheless laid the foundations for the heroic defense of the British Island and then for the counterattack against Nazi Germany.

Martin Derry has uncovered a wealth of information about the sometimes clandestine behind the scenes activities that characterised Britain's build-up to war in the face of mounting evidence of German militarism. Reads like a black ops list in some cases. Fascinating.

In conclusion, this was an enjoyable, and uncomplicated review the RAF inventory over the period 1936-1939. The narrative is accessible and pre-supposes no prior knowledge. This book could be used as a springboard for further study, or simply as a welcome addition to any self-respecting bookcase

Certainly I, for one, had no idea that there were so many different types of RAF aircraft in the skies in the run up to the Battle of Britain. As the book points out, we've all heard of the Spitfire and the Hurricane fighters, and the Lancaster and the Sterling bombers, but the cast was far larger than this, and each plane played its part.

The aviation enthusiast, of course, may scoff and say that this is all old news. For me though, this was enlightening, and the book's helpful format easily makes it an engaging page-turner. There's a useful introduction, acronyms helpfully explained in a glossary, and of course the archive photos, all accompanied by economic well-written text. This was the type of book I loved when I was growing up, and it will sit happily with other books in my limited RAF library today.

Yes folks, back with probably my favourite book series from Pen and Sword books. Prelude to War The RAF 1936-1939 was a title I been looking forward to reading, as my son and I both have a keen interest in all things to do with the RAF. It always surprises me when looking at the RAF in the 30’s as to how basic the aircrafts war, as you have the impression that it must be full of Spitfires and big hulking Bombers such as the Lancaster or Wellington, but you’d be wrong. This book is split into 5 chapters Fighters, Bombers, Submarine Patrol, General Purpose and Waiting in the Wings, this was a good way to separate but your still looking at planes as in bi planes and planes in their design infancy. Most of these planes are very interesting and some quite amusing, but you are left with the feeling that it was a good job the RAF were able to advance their designs and building.

What I probably don’t mention as much as I should do is the little captions and snippets of information about the photographs that appear in these books. They are always clear and very informative. I thoroughly enjoyed this book especially the chapter about Submarine Patrol planes mainly because many were based in my county to patrol the Irish sea and the Atlantic. The book also has an excellent section at the beginning which sets the scene for the rest of the book and the number of photographs, there must be at least 200 are all of high quality and very clear that tells the story as you go along. I learnt a lot from this book and would highly recommend it. Pen and Sword has it in the bag again.

A fine collection of images, and all accompanied by some helpful and well informed captions. I think modellers and aviation historians will enjoy this one.