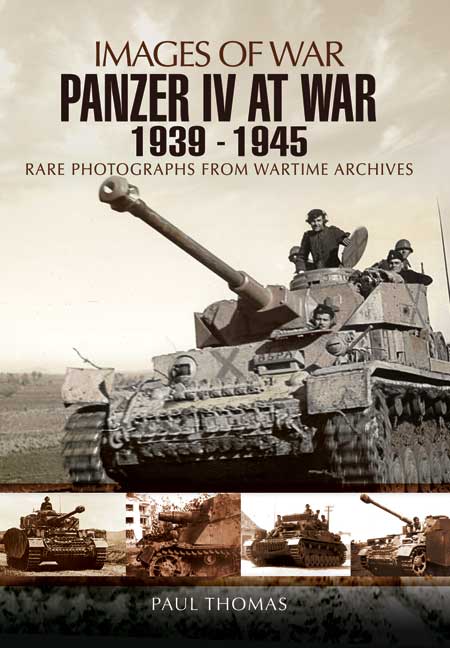 Click here for help on how to download our eBooks
Add to Basket
Add to Wishlist
You'll be £4.99 closer to your next £10.00 credit when you purchase Panzer IV at War 1939 - 1945. What's this?
Need a currency converter? Check XE.com for live rates

With comprehensive captions and text this superb book tells the story of the production of the Panzer IV to the key battles in Poland, France, North Africa, Italy, Russia and North West Europe. Initially the Panzer IV was designed as an infantry support tank, but soon proved to be so diverse and effective that it earned a unique tactical role on the battlefield.

The book shows how the Panzer IV evolved and describes how the Germans carefully utilized all available reserves and resources into building numerous variants that went into production and saw action on the battlefield. It depicts how these formidable tanks were adapted and up-gunned to face the ever increasing enemy threat.

Between 1936 and 1945, over 8,000 Panzer IV’s were built. For most of the war this tank was a match for its opponents’ heavy tanks and quickly and effectively demonstrated its superiority on the battlefield.

The Panzer IV was the only German tank to remain in production during the war. Its chassis was converted into more models than any other Panzers that entered service. As well as the various prototype projects and command tanks, observation vehicles, ammunition carriers, recovery vehicles, amphibious armoured ferry vehicles that saw service, the book will show a multiple of converted anti-tank propelled vehicles.

For the many tank enthusiasts around the globe this book is a must have item for their collections. Full of excellent archive photographs of the most iconic tank of World War 2.

Paul Thomas has brought together a fantastic set of photographs showing the PzIV in all her marks and variations.
I always marvel at how these pictures are collected and am please yo say that the reproduction is generally of a very good standard.
This book is a winner whether you are a model maker, interested in German armour, or just interested in tanks.
This is a great book.

A part of the "Images of War" series, this book provides a photographic history of the Panzer Mk IV; a mainstay in the German arsenal and their only tank to remain in production throughout the Second World War. Many superb and rare photographs are displayed with detailed explanatory captions, mostly covering events on the Russian Front. The photographs also describe the development of the tank through its numerous variants to the Mk IV J model, as well as spin-off designs including the Hummel, Jagdpanzer IV, StuG IV and Brummbär.