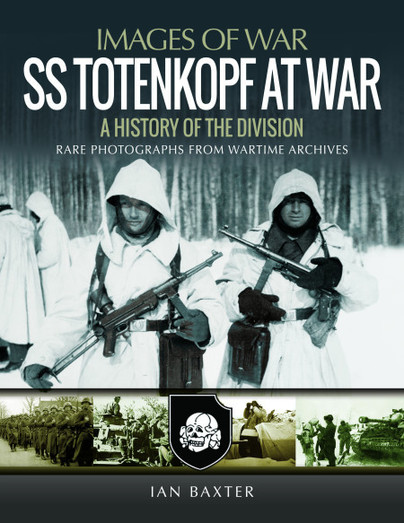 Add to Basket
Add to Wishlist
You'll be £14.99 closer to your next £10.00 credit when you purchase SS Totenkopf at War. What's this?
+£4.50 UK Delivery or free UK delivery if order is over £35
(click here for international delivery rates)

The SS Totenkopf (Death Head) Division even 70 years on retains its formidable and ruthless reputation as a superbly efficient yet murderous formation. It earned this for its actions throughout the Second World War, first in 1940 during the blitzkrieg in Northern France and then on the Eastern Front. The battles at Kharkov and Kurst saw some of the fiercest fighting of that long and terrible campaign. During the long retreat back to the Fatherland the Division fought with customary dogged determination, nay fanaticism.

This superbly illustrated work, drawing on images taken by participants, portrays the SS Totenkopf's history from formation through training to the battles in northern France and in Russia.

This offering from Pen and Sword is part of the Images of War series provided me with some thought provoking images that made me think more about the men that made up the SS Totenkopf. This division that was responsible for so many deaths and suffering in the concentration camps where they evil or victims as well in a perverse sense. Regardless of your opinions on the SS these men were a fighting force to be reckoned with in the field as they fought hard and to the bitter end in many cases. This book is a great visual record of the lives and actions of men in the SS Totenkopf Division that can be had for a great price.

This new addition to the very popular Images of War series follows the established pattern of concise text, captions, extended captions and lavish illustration. Most books in this series use largely images from official archives. In this new book many images come from private albums of members of the Division – Very Highly Recommended.