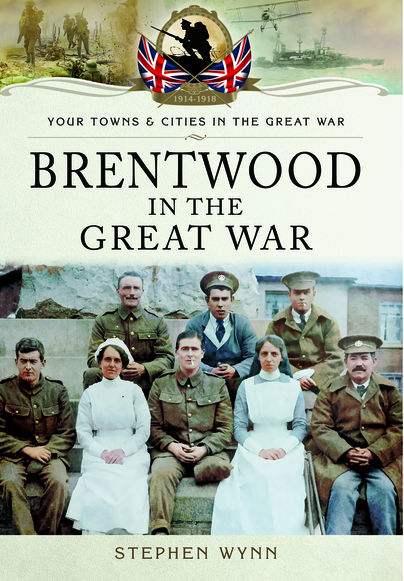 Brentwood in the Great War (Paperback)

Add to Basket
Add to Wishlist
You'll be £6.50 closer to your next £10.00 credit when you purchase Brentwood in the Great War. What's this?
+£4.50 UK Delivery or free UK delivery if order is over £35
(click here for international delivery rates)

Brentwood in the Great War tells the remarkable story of Brentwood and its surrounding areas from the outbreak of the Great War, to the long-awaited the peace of 1918.

The presence of war was never far away from Brentwood, which had its fair share of military hospitals during the Great War. Forty-three local graves commemorate the young soldiers who were patients of nearby Waverly Barracks' hospital but died from their war wounds. At least eighteen other war memorials and rolls of honour dotted around the district highlight just how important village life and a parish existence were back then, when on a Sunday everybody dressed up and went to church. From each of these locations, the individual stories of some of the men who paid the ultimate sacrifice for King and country are closely looked at to outline the sacrifices they made and why.

As the war progressed, local Military Tribunals became more and more utilized. Here, young men could attempt to obtain a certificate of exemption from military service. Some of the men were conscientious objectors; some were genuine, whose families would be met with hardship if their men left to fight overseas; some worked in munitions factories and were already doing their bit for the war effort; and others simply just didn't want to fight.

Unique primary resources provide a true picture of what life was like in wartime Brentwood, as the town is looked a through the eyes of the local press. The book reveals a strange combination, of people deeply affected by wartime restrictions and their relentless struggle to achieve the normality of everyday life amongst the madness that was unfolding around them.

The author is to be congratulated for a lot of hard work in pulling together as much as he has done to create this book. There will be new stories here for many people, and this will still be a good book to dip in and out of over the Christmas period.