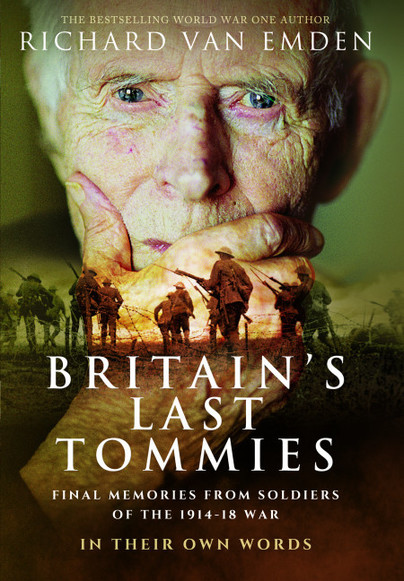 You'll be £8.50 closer to your next £10.00 credit when you purchase Britain's Last Tommies. What's this?
+£4.50 UK Delivery or free UK delivery if order is over £35
(click here for international delivery rates)

On the centenary of the Great War, there are now no longer any veterans alive of the six million men who served on the Western Front. Although this means that the Great War as a living history is to all intents and purposes over, the twenty years Richard van Emden spent interviewing and carefully recording the memories of over 270 veterans, makes this extraordinary collection of stories even more poignant.

As well as stories told by the veterans themselves, Richard has also included his own memories of these remarkable men: the remarkable, the sad, the funny, the moving. The book also features an outstanding collection of photographs taken of the veterans as soldiers during the war, together with recent images of almost all of them, taken at home, back on the Western Front or at the final veterans' reunion.

Britain's Last Tommies is the author's personal tribute to a unique list of veterans, all of whom individually held the poignant title of being the last Gallipoli veteran, the last Royal Flying Corps veteran, the last Distinguished Conduct Medal holder, the last cavalryman and the last Prisoner of War.

Article 'Our last Tommies in their own words' as featured by

Richard Van Emden spent 20 years interviewing over 270 First World War veterans. As well as their memories of the war, he includes his own reflection from getting to know these men - the sad, the funny and the poignant.

One of the most profound books I have ever read -- it brought me to tears several times. Highly readable and engrossing, I read the book in about four evenings, and could not wait to return to it each day after work. It provides as a good a texture of the war and its conditions as one could ever hope for. Anyone who has an interest in The Great War, or the nature of combat would do well to read it.