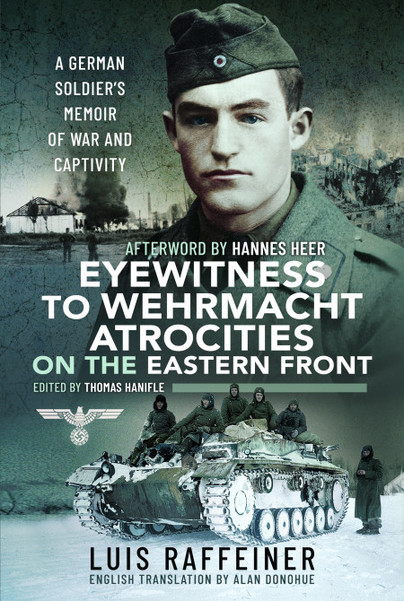 Eyewitness to Wehrmacht Atrocities on the Eastern Front (ePub)

Click here for help on how to download our eBooks
Add to Basket
Add to Wishlist
You'll be £8.99 closer to your next £10.00 credit when you purchase Eyewitness to Wehrmacht Atrocities on the Eastern Front. What's this?
Need a currency converter? Check XE.com for live rates

Providing a stark, grim, detailed, and honest insights and examples of the darkest side of World War II actions by the German military operating on the Eastern Front, "Eyewitness to Wehrmacht Atrocities on the Eastern Front: A German Soldier's Memoir of War and Captivity" is a unique, extraordinary, informative, and memorable addition to personal, professional, community, college, and university library World War II history and memoir collections.

This is however a valuable read if you want to get some idea of what it was like for a "simple" German soldier; the vivid descriptions of the hardships of being on the Eastern frontline and how luck played a huge part in his life are well documented and it also gives a really good account of Raffeiner's tough early years growing up and the choices he had to make.

This book does not hold back on detail nor information that helps to hold up the authors story. I have never read such a story! Of the many WW2 German Biographies and accounts I can say this is the most readable and detailed in a way that held my attention to the last. War s filled with atrocities by both German and Soviet forces but try finding accounts that give much of the picture and not just snippets. The amount of death from that war is staggering IMO and this is the story that usually never gets told. If you are a history buff or just want to know the truth of war then IMO you cant go wrong reading this interesting and tragic tale.

This book is a fascinating piece of history. Having read many history volumes and books on World War II, it is individual stories like these that captivate the reader. While it seems sometimes that the author downplays his part on many war atrocities he does try to paint an emotional narrative of his time in war. I have not read much about the war on the Eastern Front between the Germans and the Soviet Union and this is not the book to illuminate that part of the war. What this book does do is provide an individual account which should stir up the desire to read and to learn more. Illustrated with the author’s personal pictures, reading this book is like sitting across from Mr. Raffeiner at the pub listening to the story of his life and how he came to be a participant in the Nazi War machine. The sad part is that you cannot ask him the questions that come upon you as you read. All in all, a very enlightening and personal book.

A great book on the hardships faced by the common German soldier during the war in Russia. His hardships he faced not only during the war, but after surrendering are inspirational. This is an outstanding book.

This was a truthful look at the German army on the Eastern front during WWII by a solider who was there. He doesn't hide anything nor does he sugar coat it. There are times that it is hard read because it is a book about war. But it is worth the read.

Words are not adequate to capture my emotions when reading this powerful book. I have been reading many excellent books on WWII but this one is outstanding. It moved me to the point of taking my breath away. The words of soldier Luis Raffeiner are simple but potent, poignant, brutal, compelling, informative and descriptive. Oh, so effective. My mind practically clung to the book, as horrendous as some descriptions are, as so much of the information is new to me and very important to know.

Luis Raffeiner describes his tragic upbringing in Tyrol, his training on assault guns to Wehrmacht and life (and death) as a soldier (on the German side...he had to choose) through Poland to the Soviet Union. The atrocities committed by his fellow soldiers and sometimes himself are impossible to fathom but he does not gloss over facts. He is truthful and honest about what happened which makes the reading experience all the more emotionally gripping. During this time he took about 200 photographs and gave them to his staunch Nazi cousin for safekeeping but most disappeared. Still, several survived. And what photographs they are! Highly personal and often unsettling, though some are lighthearted. He even includes travel documents!

The stories are beyond riveting and memorable. He tells of his father's watch, fascism in school, traveling through Poland (those photos!), the first soldier killed, dreadful treatment of Jews, lice stories, taking over homes and killing livestock to survive, "restacking", desperation for food (and sometimes it wasn't even food), his mechanical inclinations (fashioning padlocks whilst in a camp) and the research hospital. But two of the most tragic include the exploding horse and warm ashes. Raffeiner saw war as a "moral catastrophe" and obeyed orders. He found himself "no longer human". However, what he experienced made him physically sick.
He himself suffered deplorable conditions including -40C in Moscow. It is impossible to imagine putting myself in his shoes for even one day, let alone years.

The last portion of the book details his life after the war and afterword. But war, of course, affected his entire self. Most people did not/do not wish to talk about it. They could not. I am extremely grateful his story was recorded. It should be required reading.

My sincere thank you to Pen & Sword for the honour of reading this heartbreaking and crushing book. It is difficult to read yet important. Thank you to Mr. Raffeiner who told his story. It will always stay with me.