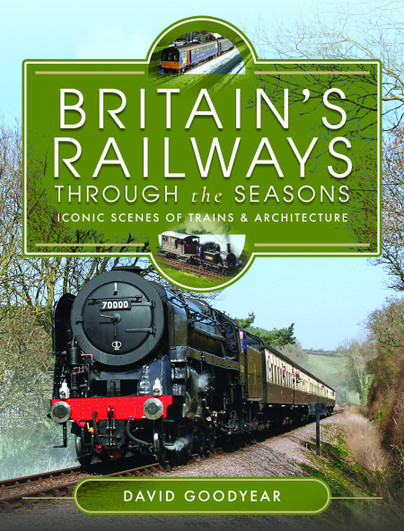 Britain's Railways Through the Seasons (Hardback)

Preorder
Add to Wishlist
You'll be £31.50 closer to your next £10.00 credit when you purchase Britain's Railways Through the Seasons. What's this?
+£4.50 UK Delivery or free UK delivery if order is over £35
(click here for international delivery rates)

The four seasons pass by like a gliding ship, each signalled by a transformation of changing colours and hues of light, thus providing a form of marker to these passages of time. Living in the temperate zone we experience four distinct seasons. The railway scene reflects such in its own special character - cold winter air enhances the bountiful steam escaping from the hissing steam locomotive impatiently awaiting its departure, while autumn enchants with trees that exude a variety of hues which embellish any image of even the most mundane suburban train. Springtime blossom and wild flowers bestow railway cuttings with a bounty of generous bright colours while coastal railways often look most inviting on warm sunny days as they pass alongside azure seas and golden beaches. The seasons each add their own dimension for the photographer to encapsulate, and railways passing through the ever-changing landscape provide their own tribute to this inspirational tapestry. As readers travel through each season, so they are invited to share this awe and constant source of inspiration from nature's kaleidoscope of colour.

Photographs are provided with captions and reflective commentary to enlighten the knowledgeable rail enthusiast alongside those who equally enjoy such a portrait of landscape and scenery through the seasons. The range of photographs ranges from the mid -1980's to the present with the majority from the last two decades.