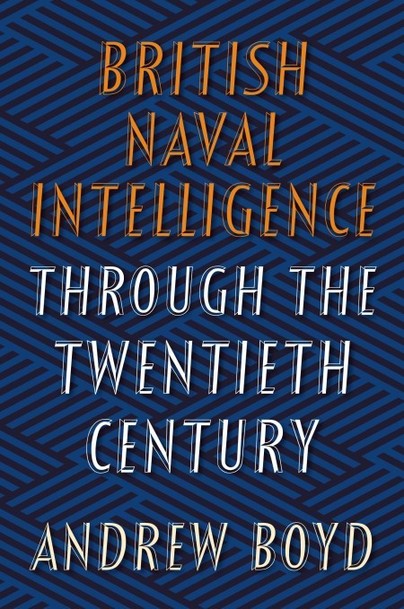 Named as the Naval Review's 'Book of the Quarter'.

'British Naval Intelligence is an unprecendented and important addition to our knowledge.' (Reviewed by Professor Gwythian Prins)

You'll be £35.00 closer to your next £10.00 credit when you purchase British Naval Intelligence through the Twentieth Century. What's this?
+£4.50 UK Delivery or free UK delivery if order is over £35
(click here for international delivery rates)

This major work is the first comprehensive account of how intelligence influenced and sustained British naval power from the late nineteenth century, when the Admiralty first created a dedicated intelligence department, through to the end of the Cold War.

It brings a critical new dimension to understanding British naval history in this period – setting naval intelligence in a wide context and emphasising the many parts of the British state that contributed to naval requirements. It is also a fascinating study of how naval needs and personalities shaped the British intelligence community that exists today as well as the concepts and values that underpin it.

Andrew Boyd explains why and how intelligence was collected and assesses its real impact on both wartime operations and peacetime policy. He confirms that naval intelligence made a vital contribution to Britain’s survival and ultimate victory in the two World Wars, but he
reappraises its role, highlighting the importance of communications intelligence to an effective blockade in the First, and according Enigma-generated Ultra less dominance compared to other sources in the Second. He reveals that coverage of Germany before 1914 and of the
three Axis powers in the interwar period was more effective than previously suggested. And though Britain’s power declined rapidly after 1945, he shows how intelligence helped the Royal Navy to remain a significant global force for the rest of the twentieth century, and in submarine warfare during the second half of the Cold War, to achieve influence and impact for Britain far exceeding the resources expended.

This compelling new history will have wide appeal to all readers interested in intelligence and its impact on naval policy and operations. It will transform their understanding of how Britain ensured its national security across the twentieth century.


Andrew Boyd 'has brought his characteristic thoroughness to this latest book', a 'substantial work', which 'combines flair for research and writing'....and 'places the activities of naval intelligence closer to the heart of the development of British intelligence than many might previously have considered'.

In conclusion, this is a very well-researched book which discusses 100 years of British naval intelligence in an accessible and readable manner and, in so doing, provides valuable new insights into our understanding of the strengths and weaknesses of British naval power during the period under review. This is an important book and should be read by all those interested in the history of the Royal Navy in the twentieth century. Very highly recommended.

An extremely well researched and comprehensive read, but, it is a weighty tome indeed. This account covers just about everything to do with Naval Intelligence you could think of, personnel, incidents, codes, ciphers and general intelligence gathering.

A good read albeit a long one. I recommend this book.

'A remarkable book which for the first time puts intelligence in its place and tells us what happened and why.'

'For any modern naval officer, gives a systematic picture of naval warfare in a way not done by anybody else.'

'There is almost no episode of recent Royal Navy history on which Boyd does not cast the light of intelligence. Certainly future historians will not be able to write British naval history without looking up what Boyd has revealed.'

'Boyd writes sublimely...' and his 'great ability is to set events of a momentous century into their context...'

'This book will become a classic work of reference. It is a superb sophisticated and comprehensive re-examination of the role and uses of intelligence and a must-read for future writers of naval history.'

Book of the Quarter

This issue’s Book of the Quarter is a ground-breaking study and an important contribution to naval and intelligence history. In this book, the author provides a comprehensive account of the development of British naval intelligence and its contribution to naval and wider national power. Moreover, the author, himself a former submariner, provides a role model for today’s officers.

The Book of the Quarter series aims to highlight one book, be it a history, memoir, biography or strategy and pique members’ interest. By buying just one book of naval relevance every three months (and selection criteria does include price), members can quickly build up a private bookshelf of quality.

This really is a fantastic book on British naval intelligence which given the author's background should come as no surprise. His understanding of intelligence and how it works ensures that this will be THE book on the subject for many years to come.

"THE BEST BOOK IN ITS FIELD".

Outstanding account and analysis of the intelligence background to British naval operations in the 20th century.

If you think you know about this subject and especially the two World Wars, think again - and enjoy and admire the original research and fresh insights that populate this authoritative, comprehensive history.

"A detailed and scholarly book with important revelations".

This book is a great read. It is lengthy but stringently researched and gives insight into the vital role Intelligence played in many conflicts.

A definitive account by an author who brings naval experience to a welcome understanding of the British application of intelligence to strategic positions. Original excavation of official records is combined with a fine judgement of personalities and a developed, most accessible, narrative style. This great book is a must-read for anyone seeking the secret story of Britain's fortunes, through war and peace, in relation to foes and friends alike.

"The best book on this subject".

A really excellent and thorough analysis. It actually goes far beyond straight intelligence, discussing also nuclear targeting, the UK development of its own Chevaline warheads and decoys, etc. More readable than other books discussing 20th century intelligence such as Hinsley which was overburdened by discussions of structures and committees.

One will learn a lot by reading this. My goodness, a lot of work must have gone into this masterpiece from someone with inside knowledge of how defence works from his time in the Navy.

This is a rich and beautifully nuanced book, packed full of lessons for any RN officer who wishes truly to come to grips with the evolution of the Service: a history prerequisite to a contemporary understanding of the full reach of naval power. As Andrew Lambert rightly observes in his Foreword, it is in many ways definitive. It is worth every penny of its £35.

British Naval Intelligence is an unprecedented and important addition to our knowledge. The book kept this reviewer on the edge of his seat from start to finish, it cements Dr Boyd’s reputation as one of our leading naval and intelligence historians of this generation in lineal succession to the earlier generation of historians such as Marder and Roskill. Boyd offers us nothing less than a comprehensive rebalancing and a new way of looking not only at naval intelligence but at the entire modern history of British intelligence and hence of the deployment of British power.

British Naval Intelligence Through the Twentieth Century is a truly great work in every way and is necessary and fundamental reading for everyone with an interest in modern naval history.

'To the serious student of modern naval history, this book must be consulted and referenced.'

'To be frank, I couldn't put the book down as each page contained a historical gem.'

There is so much in this book that a mere summary does not give space for comment on more than a tiny fraction of its content. I can say without hesitation, however, that it is a masterly history of British naval intelligence that deserves to be placed in the essential category. This book brings a new dimension to the historiography of naval operations in the twentieth century and I recommend it unreservedly.

Having served in the Royal Navy during the period this book covers I found Andrew Boyd’s monumental new history a compelling read. Not far short of 800 pages, the text is supplemented by extensive notes and a useful bibliography.
Boyd provides the first comprehensive account of how intelligence influenced and sustained British naval power from the late nineteenth century, when the Admiralty first created a dedicated intelligence department, through to the end of the Cold War. It brings a critical new dimension to understanding British naval history in this period setting naval intelligence in a wide context and emphasising the many parts of the British state that contributed to naval requirements. It is also a fascinating study of how naval needs and personalities shaped the British intelligence community that exists today as well as the concepts and values that underpin it.
Boyd’s work will appeal to historians of the twentieth century and also to those readers interested in intelligence and its impact on naval policy and operations.

‘In this monumental study Andrew Boyd more than confirms his position as one of the most important naval historians of the current era. His extraordinarily comprehensive and original account of intelligence and its key impact on strategy and operations must now be a common starting point for any serious work on modern British naval history.’

‘This superb study gives the first truly comprehensive picture of British naval intelligence in the 20th century. Exhaustively researched, elegantly written and persuasively argued, it provides a nuanced portrait of intelligence gathering as a “cumulative process of knowledge and understanding”, and explains how that affected British naval policy, strategy and high-level operations. Dr Boyd is a historian of rare talent and his book will be required reading for anyone interested in naval history or Britain at war in the 20th century.’

‘British naval intelligence has needed and deserved a book of this depth and calibre for a long time. Andrew Boyd combines a cool detachment, an insider’s feel and a talent for archival work with an eye for context, moment and significance.’

'This book is at once a comprehensive and sophisticated re-examination of a fascinating subject, an opportunity to emphasise the place of intelligence in the wider work of navies, in peace and war, and to stress the critical role of naval power in British policy.’

ANDREW BOYD CMG, OBE, DPhil was educated at Britannia Royal Naval College Dartmouth and St John’s College, Oxford. He served as a submariner in the Royal Navy in the 1970s and subsequently the Foreign & Commonwealth Office.  He received his DPhil in naval history from the University of Buckingham in 2015 and is the author of the widely acclaimed study The Royal Navy in Eastern Waters: Linchpin of Victory 1935–1942 published by Seaforth.