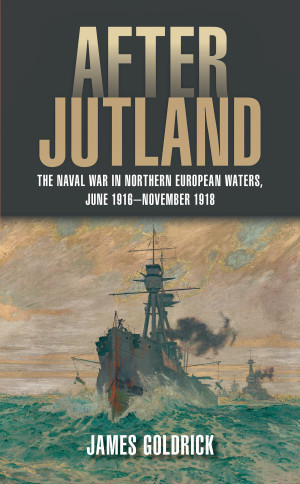 Click here for help on how to download our eBooks
Add to Basket
Add to Wishlist
You'll be £10.00 closer to your next £10.00 credit when you purchase After Jutland. What's this?
Need a currency converter? Check XE.com for live rates

This is the story of the naval war in northern European waters following the critical if inconclusive battle of Jutland. There is a popular misconception that the battle marked the end of the operational career of the German High Sea Fleet. The reality is much more complex. The German battle fleet may have been quiescent in the North Sea, but it supported an ambitious amphibious campaign in the Baltic while an ever more bitter commerce war was waged by U-boats; and smaller warships of both sides fought a gruelling campaign in the waters of the English Channel and the Belgian Coast.

While the book focuses primarily on the Royal Navy as the dominant maritime force, it also analyses the struggles of the beleaguered German Navy as it sought to find ways to break the tightening stranglehold of the Allied blockade. It includes an assessment of the small, but increasingly significant supporting role played by the French Navy from its bases in northern France, while the continuing conflict in the Baltic is explored as the Germans increased pressure on Russian territory and the Russian fleet, despite the descent into revolution, still managed to strike heavy blows at the Imperial German Navy.

This period was one of great change. The Royal Navy improved the way that ships and their crews were organised for battle, and there were great leaps in communications and in command and control; aviation and undersea operations, including mine warfare, developed at breakneck pace. Both Germany and Russia undertook far more naval innovation and technological development in the final years of the War than is often realised, and by 1918 the protagonists were fighting what was, in every way, a multi-dimensional maritime war – the forerunner of the form of naval conflict of the remainder of the twentieth century.

The author deals with the entry into the conflict of the United States and the increasing commitment of the US Navy to operations in Northern European waters. Many of the foundations of success in the next war were laid by the USN at this time, and there are strong links between the performance of all the navies and their experiences in 1939–45. Not only were doctrine and technology shaped by the events of the First War, so were the cultures of the various services and the characters of the individuals who would go on to serve in the highest ranks in the next. All of this makes the 1916-18 period so significant in naval history.

In addition to his huge historical knowledge, the author brings his own extensive personal experience of naval operations and command at sea to this study, and this fusion of history with practical understanding sheds a unique and fascinating perspective on his analysis of the conflict.


Some of the many photographs are from Australian sources so may well be new to many readers. The text is comprehensively supported by useful charts. The great deal of hard work that has gone into this book is lucidly presented in a comprehensive and balanced manner, with due notice taken of the fog of war - the RN intelligence system slow to mature - and the physical limitations of poor visibility and actual fog are taken into account in a seamanlike manner.

This was a very enjoyable book to read; educational, relevant, and featuring a good balance of technical insight as well as flowing narrative. It is strongly recommended for the casual historian as well as the dedicated researcher. The publisher has produced a very high quality book to go with the excellent read.

Overall Goldrick’s book is a worthy sequel to his earlier history of the naval war in the North Sea. By expanding the scope of his coverage and integrating technological innovations and intelligence efforts, he provides a well-rounded operational history that incorporates factors often excluded from previous accounts.

Goldrick combines his personal experiences in naval operations and command with dedicated research to anchor engrossing insights into this momentous chapter in naval history.

Overall, this is a great book which I thoroughly enjoyed. It is a flowing account by a professional seagoing officer with insightful analysis and a strategic and operational sense which is sometimes missing in accounts of military and naval operations. It is strongly recommended for the general reader an expert alike.

Admiral Goldrick concludes this well-researched book by asking how effectively the Germans employed the navy it had created. He answers his own question: not well. The High Sea Fleet was always limited in fuel and material, but it was not employed as aggresively as it might have been. He levels many criticisms of the RN’s leadership and slowness to bring together an experienced staff to manage strategic planning. He recognises the difficulties faced by those developing ship-borne aviation, but states that the widespread embarked deployment of fighters and reconnaissance aircraft by the end of the war “represented a formidable capability”. He disproves the popular misconception that the Battle of Jutland signalled the end of offensive operations by the High Sea Fleet, whilst demonstrating that it did initiate widespread improvements in the operational capability of the Royal Navy.

This is a scholarly book, with copious notes, extensive bibliography and a full index.

Friends of the Fleet Air Arm

This is an extraordinarily absorbing book, leaving one almost breathless as it covers every aspect of the naval war of the last years of WW1 from morale to the development of weapons and tactics. Very highly recommended.

Overall ‘After Jutland’ is a much needed addition to the commonly available naval histories of WWI but it is more it is a beacon for those who wish to think about the past in order to better understand the future. Highly recommended.

‘After Jutland’ approaches the First World War at sea from a refreshingly different angle and deserves attention from serious maritime history enthusiasts.