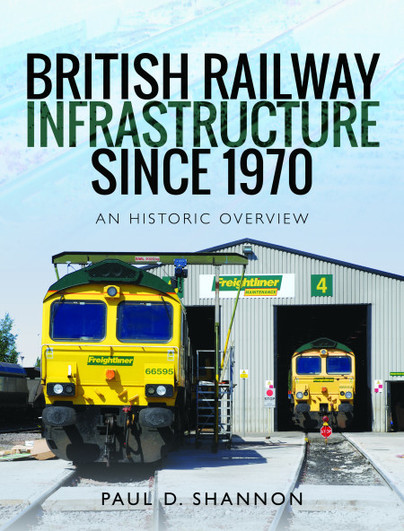 Add to Basket
Add to Wishlist
You'll be £25.00 closer to your next £10.00 credit when you purchase British Railway Infrastructure Since 1970. What's this?
+£4.50 UK Delivery or free UK delivery if order is over £35
(click here for international delivery rates)

The book is very well produced with clear type, excellent photographic reproduction in both colour and black & white and good layout.

This book takes a mainly pictorial journey through time for each of these topics, using a selection of interesting and well-reproduced images, documenting how the scene has changed from the old to the new.

An interesting and recommended work.

A nice and tremendously interesting book.

This book looks at all the various changes that have taken place in Britain's railways since 1970. In other words - over the past 50 years. Such things as freight, stations closing and opening, or re-opening, locomotive depots and signalling are all covered in detail. What makes this book so good is the number of photographs supplied by the author ranging from back in the 1970s to the present. This is a book worth having if you are interested in the infrastructure of Britain's railways. Beautifully illustrated.