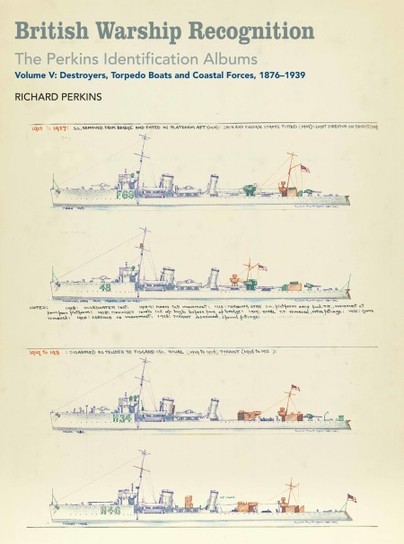 Add to Basket
Add to Wishlist
You'll be £52.50 closer to your next £10.00 credit when you purchase British Warship Recognition: The Perkins Identification Albums, Vol V. What's this?
+£4.50 UK Delivery or free UK delivery if order is over £35
(click here for international delivery rates)

The fifth volume of the series is largely devoted to surface craft whose primary weapon was the torpedo: destroyers and their flotilla leaders, 1st- and 2nd-class torpedo boats, Coastal Motor Boats and MTBs, although it also includes the Great War-era P-boats and the Motor Anti-Submarine Boats of the late 1930s.

reviewed by Stephen Dent for

Volume five covers destroyers, torpedo boats and coastal craft dating from 1876 to 1939. The book highlights the rapid development of destroyer design as the ship gained in importance as an escort, as a scout and as an attacking option... Ok, these books are on the niche side but they are things of beauty and lovers of warships and the development of naval architecture from well over a century will find much to admire.

This volume covers the work horses of the Royal Navy, from coastal vessels to blue water warships. – This is a reproduction of the set of eight volumes held by the British National Maritime Museum where it has provided an unparalleled source of information for the Museum’s staff – Most Highly Recommended.

The pages are high quality reproductions of the original pages of the Perkins albums and the information continues to be amazing and in my view, the artistic quality of the illustrations as well as the pages of detailed hand-written notes are a joy to see in their own right as a piece of artistry, let alone the dedication he shows by recording the subject to this level of detail, at a time when the Royal Navy really was the greatest fleet in the world.

Even the neatly written text notes show changes as the author added or updated notes over time. One or two have been added by archivists over the years, but remarkably few. What you have is very much a 'bible' of help to identify not only individual ships in archive photos, but also to indicate what year it shows the vessel. Individually the book is a delight to see by itself and as the growing set a magnificent reference.

With its wealth of data and the high quality printing of literally hundreds of warship drawings, this book deserves positive, even enthusiastic comments...

The publisher describes Perkins’ work as ‘monumental’ and given the scale and importance of the resulting volumes, especially this one, I consider that adjective to be fully justified. This latest volume adds considerably to our knowledge of both the subject and the era; I have no hesitation in recommending it.