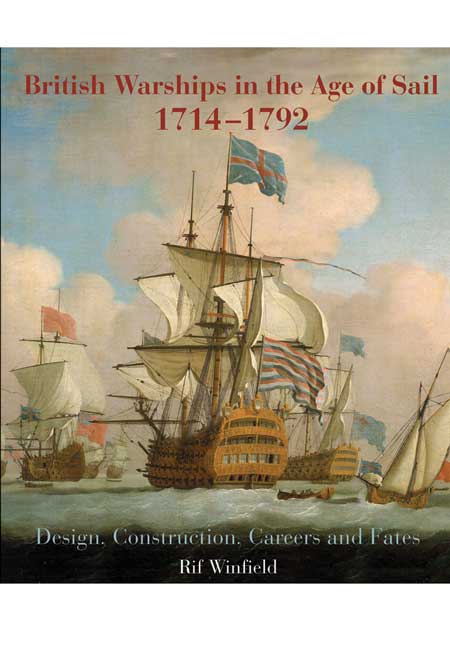 Click here for help on how to download our eBooks
Add to Basket
Add to Wishlist
You'll be £30.00 closer to your next £10.00 credit when you purchase British Warships in the Age of Sail 1714-1792. What's this?
Need a currency converter? Check XE.com for live rates

The new Hanoverian dynasty that came to power with the accession of George I in 1714 inherited the largest navy in the world. In the course of the century, this force would see a vast amount of action against nearly every major navy, reaching a pinnacle of success in the Seven Years War only to taste defeat in the American Revolutionary struggle, when it faced the combined navies of France, Spain, the Netherlands, and the rebellious colonies themselves. Considering the contribution to history of these ships, there is surprisingly little readily available on their careers. Now this gap is comprehensively filled by this superb reference book, outlining the service history of every ship, built, purchased or captured, that fought for the Royal Navy in the great wars of the eighteenth century - well over 2000 vessels. The book is organised by Rate, classification and class, with outline technical and building data, but followed by a concise summary of the careers of each ship in every class. This includes commissioning dates, refit periods, changes of captain, the stations where they served (and when), as well as details of any noteworthy actions in which they took part. It will enable anyone to follow up a casual reference to any warship, and will provide the researcher with a solid core of information on which to base further study. With nothing remotely like it in print, this is a work of the utmost importance to every naval historian and general reader interested in the navy of the sailing era.

A wonderful example of indefatigable research and scholarship.

Winfield has produced a magnificent volume. This is an invaluable work of reference an an essential tool for anyone researching the 18th Century Royal Navy.

It is a remarkable piece of research and dissemination that any serious student of Royal Navy history should rush out to buy. Highly Recommended.

This is a monstrous piece of work and covers the design, construction and career or virtually every vessel that served in the Royal Navy between 1714 and 1792. Divided into ten chapters to cover all the various types of ships in commission, there are also additional appendices which expand on the many terms and abbreviations used throughout the book. The information on each ship is perhaps the most exhaustive I have seen in any volume of this type. There are plenty of illustrations, as well as line drawings, many of which have been specially commissioned for this book. If found it interesting to browse through in quiet moments and an excellent companion to the many books about ships from this period that have preceded this work.

The work is a remarkable example of how an eminently talented author can ferret through the immense 18th century archives of the British Admiralty Board, and refine the raw contents into a superb reference book..... Altogether, a significant work of reference of immense value.

This book is quite frankly superb and deserves to be included in the library of anyone interested in this period of Maritime history. For what it is, the book is far from expensive at Â£50.00.

It is an easy to read book, which will serve to start the reader on researching a great period of British naval history. Specially drawn general arrangement plans, accompanying B&W photographs make this 384 page to me a must for anyone even remotely interested in the subject. Highly recommended.