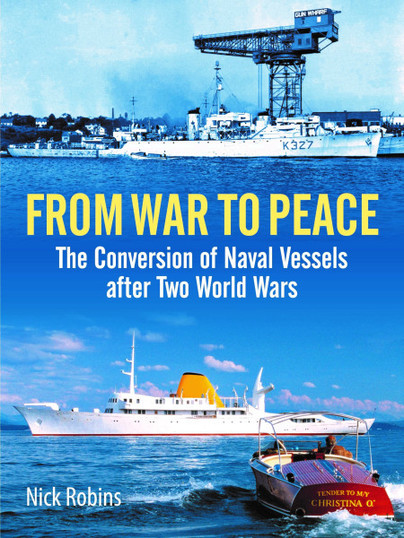 From War to Peace (ePub)

Click here for help on how to download our eBooks
Add to Basket
Add to Wishlist
You'll be £9.98 closer to your next £10.00 credit when you purchase From War to Peace. What's this?
Need a currency converter? Check XE.com for live rates

Authors have thoroughly documented the stories of merchant vessels that were converted for wartime; the redundant navy ships that went the other way are less well known. Nick Robins sets the record straight in a book that includes the 19th century as well as the world wars. This thorough account covers cruisers turned to liners, minesweepers to ferries, military launches to private yachts, corvettes to whalecatchers, and many other surprising transformations. Technical descriptions are sometimes provided alongside the historical detail, and there are images on every page to illustrate the changes. Perhaps the industry could take inspiration from this book when approaching the current transition to cleaner maritime technology?

I read this book out of curiosity, having grown up near Portsmouth. How glad I am that I did. This fascinating subject is well covered both in terms in the range of types of vessels and the usages that they were put too. Whilst at times I did get a bit lost in some the technical terms and descriptions being used, this did not put me off finishing this book.

The copious pictures through out really show the diverse usages as well as the huge quantities of vessels both available and used. The author manages to walk that fine line that makes this book accessible to the casual/general interest reader such as myself but also appears to have enough technical details to be attractive to the specialist reader.

It is fascinating to trace the impact of the vast amount of military shipping being disposed of to the civilian market. The lives of some vessels was extended by their conversions so that they are still in service decades after the end of their military service.

Nick Robins has done something unusual and fresh with this book. The book is most certainly about naval vessels, but with a really interesting twist. As a result, it is a refreshing and intriguing book to read.

This book looks at the next life of shipping vessels used in World War I & II, and it was amazing how many of these were able to have a second use and many of them in the leisure industry.

Well illustrated with archive photos throughout, with not only some showing ships in their wartime form, but so many in their converted format of civilian service, and despite new superstructures, still clearly displaying their warship hulls. With the volume of surplus vessels after WW2 it is little wonder that they offered a cheaper alternative to building a new vessel from scratch and no doubt encouraged some commercial businesses to actually start up after the war. Fascinating reading and the photos add so much to show what happened to the many small ships that had seen so much suddenly found themselves out of a job as the war ended.

Every ship has a tale to tell from the convoy escort duties of the Flower class and escort carriers before conversion back to peaceful tasking, to the Christina whose post war story is possibly more exciting than her wartime story. A fascinating story of how peacetime imagination enabled commercial shipping to successfully adapt warships after conflict.