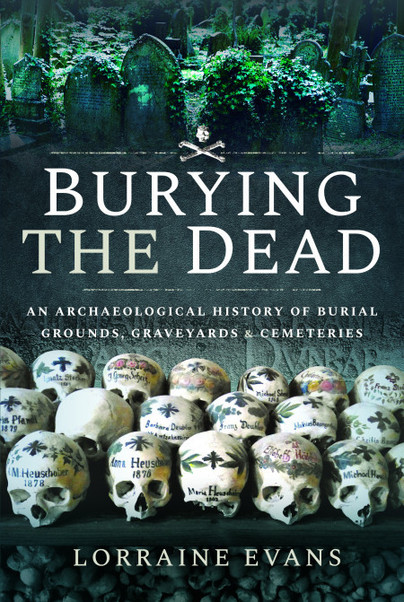 An Archaeological History of Burial Grounds, Graveyards and Cemeteries

Preorder
You'll be £15.99 closer to your next £10.00 credit when you purchase Burying the Dead. What's this?
+£4.50 UK Delivery or free UK delivery if order is over £35
(click here for international delivery rates)

Deep in the heart of North Yorkshire, at a place called Walkington Wold, there lies a rather unusual burial ground, an Anglo-Saxon execution cemetery. Twelve skeletons were unearthed by archaeologists, ten without skulls, later examination of the skeletons revealed that their owners were all subjected to judicial execution by decapitation, one of which required several blows.

Similar fates have befallen other wretched souls, the undignified burial of suicides - in the Middle Ages, the most profound of sins - and the desecration of their bodies, go largely unrecorded. Whilst plague pits, vast cemeteries where victims of the Black Death were tossed into the ground, their bodies festering one on top of another, are only today betraying their secrets.

Although unpalatable to some, these burial grounds are an important part of our social heritage. They have been fashioned as much by the people who founded and used them, as by the buildings, gravestones and other features which they contain. They are records of social change; the symbols engraved upon individual memorials convey a sense of inherent belief systems, as they were constructed, adapted or abandoned depending on people’s needs.

Burying the Dead explores how these attitudes, practices and beliefs about death have undergone continual change. By studying the development of society’s funerary spaces, the author will reveal how we continue to reinforce our relationships with the dead, in a constant and on-going effort to maintain a bond with them.

Lorraine Evans is an Archaeologist and Death Historian, specialising in mortality symbolism, funerary architecture and deviant burials. She is a successful author of a number of books, ranging from Ancient Egypt to World War One, and has worked on countless historical documentaries. Her research skills are often in demand as is her acclaimed photographic work, which has been exhibited all over the UK. She is currently a PhD candidate at the IIPSGP and can be followed at www.lorraineevans.com or www.mortephotography.co.uk